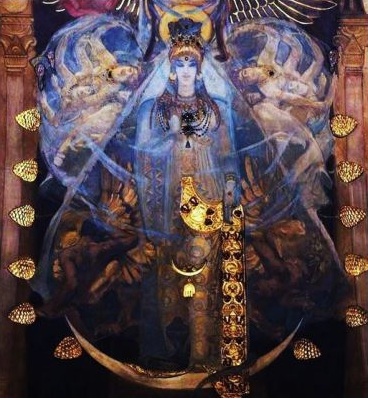 The image of Venus has really changed over the years, morphing from her early days as a complex warrior queen and sexual goddess to a more two-dimensional character, the Goddess of Love and Beauty.

While Venus is retrograde I thought it would be a good time to look at the OTHER side of Venus.  The archetype that we now call Venus/Aphrodite was a female goddess that originally presided over sexuality, fertility, and war in ancient Bronze Age Mesopotamian civilization.  She was called Astarte in Greece, Ashtoreth in Hebrew, Inanna in Sumeria, Isis in Egypt and Ishtar in Akkadian nations.  These goddess shared the power to create kings and generally married the son/lover who then died to be reborn again (the dying/resurrected god), and all were associated with the planet we now call Venus.

This ancient goddess possessed an unabashed sexuality and was prone to flowery exclamations such as “”Plough my vulva, man of my heart.”  But she was also instrumental in cementing political power of the king and ensuring the preservation of that power through warfare.  (Here is a great site with the details of her qualities and legends.)  All of these goddesses were called “Queen of Heaven,” as is, “coincidentally”, Mary the mother of Jesus.

Our astrological archetypes are filtered through Roman civilization from the ancient Greeks, and these cultures were primarily patriarchal in nature.  It is not surprising, therefore, that the ancient power of women to bear children and wield sexual authority was minimized and that the qualities of the ancient female goddess were weakened and made less threatening.  From possessing the power over life itself, the main astrological goddess became the queen of love and beauty, a flirtatious but still dangerous feminine archetype.

I believe that these more powerful and multidimensional of qualities of Venus that were identified with the earlier goddesses have not really been lost, and while Venus is retrograde perhaps we can invite them to participate fully in the healing and transformation of our world.