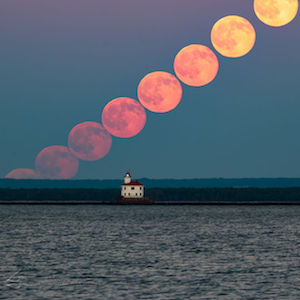 While the Summer Solstice is usually celebrated on June 21st, the astrological Solstice occurs when the Sun enters Cancer, and that occurred this year on June 20th.  This Summer Solstice coincided with the Full Moon, something we hadn’t seen apparently since 1948 (according to news reports).

The Sun is strongest in a sign when it first enters that sign, and when the Sun enters one of the Cardinal signs (Aries, Cancer, Libra, Capricorn) it is even stronger.  The cardinal signs initiate a new season – a new phase in human life – and the energies in the Solstice and Equinox charts are often used to forecast the weather for the season.

So we have the conclusion of a lunar cycle occurring at the same time as a beginning of a solar cycle – a confluence of events that signifies a closing of one door and an opening of another.  The Sagittarius Full Moon seeks expansive dreams and increased wisdom, and the Summer Solstice and Cancerian Sun brings fertility and water to nurture the soil and plants.

However, with Saturn (rules and boundaries) in Sagittarius (expansion and faith) we have to continue to set limits and be realistic (Saturn) and careful not to let the Sagittarius confidence expand beyond the bounds of reason.  Saturn is in a challenging square to Neptune right now, challenging our ideals and putting a kibosh on our dreams until we have built a solid foundation on which they can thrive.

This Saturn/Neptune square sometimes corresponds to a sense of spiritual deprivation which makes this a good time to bring our attention back to a spiritual (Neptune) practice (Saturn).  Neptunian spirituality is not always meditation or something directly spiritual – it can be a practice of music or art which also helps us to transcend the boundaries of ordinary consciousness.  Magic is needed during these times – but we must temper our search for Magic with the care and diligence of Saturn as long as this square is in effect.