Repost: The astrology of Elena Kagan

Repost: The astrology of Elena Kagan

In honor of Elena Kagan’s confirmation hearings, and because I’m busily working on the July Skywatch (please sign up in the sidebar if you’re not already on my mailing list!) I thought I’d repost this profile of Ms. Kagan. 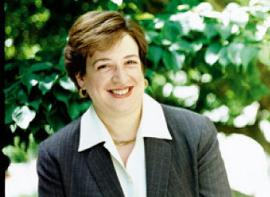 Elena Kagan has been widely acclaimed after President Obama announced her as his choice to be the next Supreme Court justice, garnering support from conservative lawyers and policymakers.  One of the qualities that has gained her widespread affection and respect is her ability to entertain arguments across the political spectrum.  She is a trailblazer, having been the first woman named Dean of the Law School at Harvard University, and isn’t afraid to challenge the sacred cows of American politics.

Kagan’s astrological chart shows that she was born with the Sun in Taurus, indicating a desire for peace and harmony but also a stubborn streak and a fixed nature.  Her Sun is in a harmonious trine to Pluto, which reveals her ability to effect change and to transform (Pluto) the world around her.  Individuals with Sun trine Pluto typically possess a great deal of personal power and can be very magnetic.

The planet of rebellion (Uranus) is in a stressful square to Kagan’s Sun, reflecting her iconoclastic nature and her desire to push the boundaries of conventional rules.  As a child of 12  she challenged her rabbi to institute the bat mitzvah in her Orthodox synagogue, and persuaded him to do it.  She fought Big Tobacco for the Clinton administration, yet worked hard to heal fissures between faculty members while at Harvard.

Kagan’s chart shows a conjunction of Mercury and Venus in the assertive sign of Aries.  Her thought patterns (Mercury) and the way that she expresses her affection and seeks relationships (Venus) operate with Aries characteristics of courage, confidence and directness.  Mercury and Venus are in a harmonious trine to the rebel and innovator Uranus, which gives her the ability to embrace different and unusual (Uranus) ideas and ways of thinking (Mercury).  It also makes it easy for her to understand and forge relationships with people (Venus) who are very different from herself (Uranus).

Like President Obama and Sarah Palin, Kagan has Neptune (mystery and confusion) in a challenging aspect to her Sun.  This is a challenging situation that can make it difficult for one to define one’s personal identity, and it also makes it difficult for others to see one as we really are.  We have seen with both Palin and Obama how easy it is for us to hang our projections of who wethink they are, and how difficult it is to see these people as real humans rather than archetypes.

Kagan also has Mars in Pisces, the sign that is associated with Neptune, so her personality has a strongly Neptunian cast.  Neptune is the planet that encourages us to seek beyond the boundaries of the material world.  It is the planet of spirituality and compassion, but also the planet of deception and illusion.  When Mars is in Pisces it can be more difficult to assert oneself, but for someone with Kagan’s degree of personal power (Sun trine Pluto) Mars in Pisces can soften the blow.  Her Mars is well-aspected, suggesting that she can use the sensitivity of her nature to be able to follow through on her instincts.

Kagan does have a few difficult aspects in her chart though: Pluto is in a challenging square to her Moon and Saturn is square to Venus and Mercury.  The Pluto/Moon square suggests a challenging relationship with the mother and an emotional intensity. This New Yorker article suggests that Kagan’s mother Gloria was demanding and difficult, which bears out the astrological theory.

She also has Saturn in a square to both Mercury and Venus.  Saturn adds gravitas and focus to Mercury but also instills a sense of the importance of rules.  The Saturn/Venus square, however, affects the individual much more personally, suggesting an inner isolation or a lack of confidence about one’s attractiveness.   This Huffington Post blogger reports that upon being told how proud her mother would have been of her, Elena Kagan rolled her eyes and said “My mother only wanted me to get married.”

Overall though, this is a good chart for a Supreme Court Justice – compassionate yet strong, able to embrace new ideas while reaching out to others to forge consensus.