Rod Blagojevich – The Astrology of Hubris

Rod Blagojevich – The Astrology of Hubris 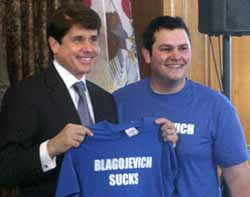 You may have heard that the governor of Illinois was arrested today for trying to sell the Senate seat left open by the ascendancy of Barack Obama to the highest bidder.  What was this guy thinking?  Evidently he had been under investigation for fraud since 2003 (according to the text of an affidavit in the case), yet he continued to engage in more and more outrageous acts of corruption and fraud.  The court documents are an extremely entertaining, though shocking, read and include items such as these:

This kind of self-aggrandized behavior is often indicated in the astrological chart by a strong Jupiter.  In Roman mythology, Jupiter was King of the Gods, and Jupiter in the chart, particularly a stressed Jupiter, can show where we want to actually be a god. The astrology chart of  Blagojevich (born 12/10/1956, time unknown, Chicago IL) has the Sun in Sagittarius, which is ruled by Jupiter, and Jupiter in his chart is nearly exactly opposite Mars the warrior.  Mars shows how we manifest our drive and desires, and when opposed by Jupiter our drives and desires can become expanded and inflated.

Blagojoevich’s Mars is in Aries, the sign which it rules, intensifying the aggressive instinct and a natural courage and independence.  This unadulterated God of War is part of a Grand Trine in fire with Saturn in Sag and Uranus in  Leo.  The fire element bestows inspiration and energy, but also egotism and pride and individuals with fire Grand Trines are particularly susceptible to this.  Bil Tierney says of the individual with this configuration, “His faith in himself  as well as his sense of personal protection from harm is often so ingrained that he may be willing and eager to attempt anything, disregarding impossible odds, in order to fulfill his goals and objectives.”

Not all people with fire Grand Trines develop narcissistic disorders – Ghandi’s chart includes this aspect, as does Thomas Jefferson.  But when you combine the King of the Gods as the ruler of his chart, an inflated desire nature caused by the opposition of Jupiter to Mars, and the unstoppable power of the Grand Trine the potential for self-absorbed egotism and demand for adulation is very great. We can see this in the way Blagojevich treated his father-in-law Richard Mell, an established fixture in Chicago politics, without whose assistance he could arguably never have been elected.  Once Blago had taken office, he stopped returning his phone calls.  One observer comments, “Blagojevich doesn’t want to make deals, he wants a dogfight.”

Blagojevich’s chart has been battered by a series of challenging planetary transits over the past few years, and the tough time is not offer.  Transiting Pluto has been challenging Jupiter in his chart, and will soon be squaring off against his Mars where it will be joined at the end of next year by Saturn.  With the big guns of both Saturn and Pluto against his drive and personal will (Mars), the confinement of prison is not a far-fetched symbol for the kind of restriction and challenge he will face next year.

Obviously, not everyone with these planetary configurations will end up in prison.  But for some, the temptation of ego is just too great.