The roots of political orientation in personality

The roots of political orientation in personality 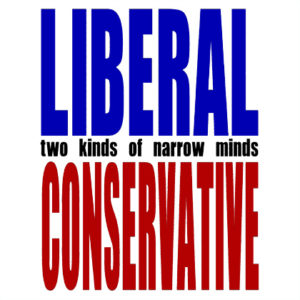 A portion of this post comes from an earlier article, but today’s political world is even more polarized than it was when this article was first written so the article is even more relevant.

[A 2007 scientific study] revealed that political orientation is related to differences in the way different brains process information.

Participants were college students whose politics ranged from “very liberal” to “very conservative.” Scientists instructed them to tap a keyboard when an M appeared on a computer monitor and to refrain from tapping when they saw a W.

M appeared four times more frequently than W, conditioning participants to press a key in knee-jerk fashion whenever they saw a letter.

The participants were wired to an electroencephalograph that recorded activity in their anterior cingulate cortex, the part of the brain that detects conflicts between a habitual tendency (pressing a key) and a correct response (not pressing the key). Liberals had more brain activity and made fewer mistakes than conservatives when they saw a W, researchers said. Liberals and conservatives were equally accurate in recognizing M.

Researchers obtained the same results when they repeated the experiment in reverse, asking another set of participants to tap when they saw W.

Frank J. Sulloway, a researcher at the Institute of Personality and Social Research, at the University of California, Berkeley, who was not involved in the study, said results “provided an elegant demonstration that individual differences on a conservative-liberal dimension are strongly related to brain activity.”

Lead author David Amodio, an assistant professor of psychology at NYU, cautioned that the study looked at a narrow slice of human behavior and that it would be a mistake to conclude that one political orientation was better than another. The tendency of conservatives to block distracting information could be a good thing, depending on the situation, he said.

We can conclude from this that conservatives tend to question established routine less than liberals do, and that liberals tend to be more comfortable with new experiences and change. Although the processing of information is identified in the astrological chart by the planet Mercury, the ancient messenger god, we can see this dynamic operate in a variety of ways in the birthchart. As with everything relating to astrology we cannot make this determination from sun signs alone, but Mercury falling into certain signs in the birthchart, especially earth signs and the water sign Cancer, lend themselves to more conservative behavior. The planet Saturn when strongly aspected will also tend to demonstrate a more conservative world view. A prevalence of fire and air signs or a strongly aspected Uranus or Jupiter would be associated with someone who has a more radical or extreme world view, whether conservative or liberal.

The birthchart of a single individual can often include several conflicting characteristics however; An Aries Sun with a Virgo Moon and Cancer rising will tend to be very individualistic (Aries) but have conservative (Virgo/Cancer) values. A Virgo Sun with a Taurus Moon who has the sun in square to Uranus will be torn between the need for safety and security that resists change (Virgo/Taurus) and the urge for radical freedom of Uranus.

Most of us are conscious only of one of these dimensions while the other operates on a subconscious level and many people begin life on one end of the political spectrum and change as they age. My chart has Saturn (conservatism) in conflict with Uranus (liberalism), and although I was a radical leftist in college my views have become much more moderate as time goes by. With my Libra Sun (sign of balance) I am more comfortable firmly in the middle. Rush Limbaugh also has Saturn squaring Uranus, but he took a sharp curve to the right in his political views.

Few of us can be categorized into a single pigeonhole, but studies like these are useful in demonstrating that personality traits are often wired into us rather than an acquired taste.