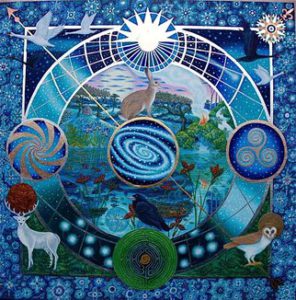 Two of the most significant planetary cycles for 2019 are the challenging square alignment between Jupiter’s expansive tendencies and Neptune’s penchant to transcend (or avoid) material reality.  The “hard angle” planetary interactions such as the square (90 degrees) and opposition (180 degrees) tends to give us more of the challenging aspects of the planetary cycle.  The Jupiter and Neptune dance dissolving the restrictions of the material world could potentially become more of a distraction into the world of self-deception and illusion, encouraged by Jupiter’s desire to continue to expand and seek larger and ever greater experiences.  Read more about the Jupiter/Neptune alignment here.

Fortunately, Saturn will bring its stabilizing influence into this dance, harmonizing in a sextile (60 degree) aspect to Neptune which helps to provide support and a solid foundation to Neptune’s creative inspiration and longing for spiritual transcendence. Where Neptune can inspire us to dream and imagine, Saturn encourages us to put those dreams to work.  And where Saturn’s influence can become somewhat dull as we work steadfastly towards our goals, Neptune adds a coating of magical fairy dust to take our goals and wishes into a new dimension.

This cycle will last throughout the year, and the middle phase of the harmonious Saturn/Neptune cycle in June will coincide with a complex system that includes Mars and Mercury in Cancer (emotional and frustrating) opposing Saturn and Pluto in Capricorn (restricting), as well as the second phase of the Jupiter/Neptune square.  That’s a whole lot of complex energies, some of which support each other and some which compete for our conscious attention.

May and June will be a complicated time, so stay tuned!

Here are the important dates for this planetary cycle: