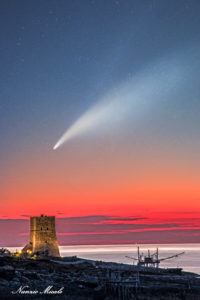 The New Moon at the Summer Solstice marked a new significant beginning – it was a solar eclipse at the zero point of Cancer, conjunct the Solstice Sun.  This week’s New Moon (conjunction of the Sun and Moon) is at 28 degrees of Cancer, exactly opposite Saturn (tests and challenges) which is currently retrograde in Capricorn, and more widely opposite Jupiter (expansion) and Pluto (intensification).  This necessitates an adjustment and balance between the realm of feelings and our inner world (Cancer) and the realm of responsibility and structure of the outer world (Capricorn). Usually it’s the Full Moon, where the Sun and Moon are in opposite signs, which necessitates a balance.  Here we have a direct infusion of Cancerian energy for a second time but we must find that balance within us to ensure that we are grounded in the physical and material world (Capricorn) as well as the world within (Cancer).

Complicating matters even more is the fact that the new planet Eris, goddess of discord, is in Aries where it is challenged by both the New Moon and the Capricorn planets. (Follow this link for more information on this interesting dynamic.). In mythology, Eris, feeling slighted at not being invited to a wedding, tossed a golden apple into the wedding party and began the Trojan War.  There is a sense with Eris that when things are out of balance, and humans don’t feel heard or respected, a chaotic result will occur that will change the course of history.  Eris is triggered by these Capricorn planets for much of the year so there’s a lot going on right now that doesn’t make sense unless we take a broader view.  With Pluto (creative destruction) in Capricorn (societal structures), governments and all of the foundational structures which support society (including corporations, prisons and police departments) are being destroyed where corrupt so that they can be rebuilt.  The chaos and disorder of Eris is merely a trigger for the destruction of aspects of society which no longer function properly.

A letting go of old and outmoded belief systems (Sagittarius) from the past (South Node) in order to adopt a broader and more inclusive approach (Gemini) that will help to take us into a more enlightened future (Gemini) is shown by a quincunx from the New Moon to the Sagittarius North Node, and a harmonious sextile from Jupiter (expansion) to Neptune (mysticism and inspiration) can help us to open the doors of perception wide enough for magical thinking to give way to practical magic and creation of a new way of living.

Finally, a new comet, discovered in March of this year, will be seen hurtling through the sky for just a few weeks in association with these two Cancerian New Moons.   I find it interesting that Comet Neowise is retrograde along with all of the other retrograde planets in the sky right now (at the time I write this five planets are retrograde).  Comets of course have had significant importance to human cultures since time immemorial. We are familiar with their portending doom and gloom, but they also were known to be the harbingers of great kings. Some believed comets to be messengers of the gods; they originate in the outer reaches of the solar system and merely appear as visitors. Who can forget the hysteria that occurred during the appearance of Comet Hale Bopp, when fringe groups waited on mountains to be taken to heaven?   In any case, comets have long been associated with messages from the future, or omens of something immense to come, and there’s no doubt that Covid-19 is going to change the face of life on Planet Earth for quite a long time.  For more information on the astrology of Comet Neowise please visit Jamie Partridge’s excellent article here.)

Under this second New Moon in Cancer the emphasis on security and emotional safety is offered for a second time, so it is very important to assess the condition of our inner world and everything related to it:  Our home environment and how well it nurtures us; our families and the people with whom we live or are close to, and how strong our web of interconnection is and how well we are supported by it; how easily we are able to keep our hearts open in the face of loss and tragedy, so that we can continue to engage in the world with a healthy inner balance.

When Mercury is retrograde we often see communication and equipment snafus, and things not going according to plan.  There is a “shadow” period lasting about a week on either side when Mercury’s movement