“Self-knowledge is only the beginning”

“Self-knowledge is only the beginning” 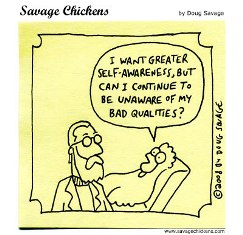 Cartoon by Doug Savage. One of the more challenging yet rewarding aspects of my work with clients is taking the leap from “here is why you have had these problems” to “here’s what you can do about it.”  It’s always reassuring to hear that your desire to flee a committed relationship comes from the fact that libertarian Uranus challenges your “I want to be closer” Venus.  Or that you are afraid of success because Saturn’s voice of “You’re not good enough” sits right on your Jupiter in Leo that says “But I should be fabulous!”

After a few years of exciting realizations like this coming out of consultations, I started to realize there was a big need for something more – a way to help a client strategize their way out of the boxes they put themselves in.

The New York Times has an interesting article on the same topic:

It is practically an article of faith among many therapists that self-understanding is a prerequisite for a happy life. Insight, the thinking goes, will free you from your psychological hang-ups and promote well-being.

Perhaps, but recent experience makes me wonder whether insight is all it’s cracked up to be.

Not long ago, I saw a young man in his early 30s who was sad and anxious after being dumped by his girlfriend for the second time in three years. It was clear that his symptoms were a reaction to the loss of a relationship and that he was not clinically depressed.

“I’ve been over this many times in therapy,” he said. He had trouble tolerating any separation from his girlfriends. Whether they were gone for a weekend or he was traveling for work, the result was always the same: a painful state of dysphoria and anxiety.

He could even trace this feeling back to a separation from his mother, who had been hospitalized for several months for cancer treatment when he was 4. In short, he had gained plenty of insight in therapy into the nature and origin of his anxiety, but he felt no better.

What therapy had given this young man was a coherent narrative of his life; it had demystified his feelings, but had done little to change them.

Was this because his self-knowledge was flawed or incomplete? Or is insight itself, no matter how deep, of limited value?

Psychoanalysts and other therapists have argued for years about this question, which gets to the heart of how therapy works (when it does) to relieve psychological distress. …

I recall one patient who was chronically depressed and dissatisfied. “Life is just a drag,” he told me and then went on to catalog a list of very real social and economic ills.

He had been in therapy for years before I saw him and had come to the realization that he had chosen his profession to please his critical and demanding father rather than follow his passion for art. Although he was insightful about much of his behavior, he was clearly no happier for it.

When he became depressed, though, this insight added to his pain as he berated himself for failing to stand up to his father and follow his own path. …

[H]e came to see me recently looking exceedingly happy. He had quit his job and taken a far less lucrative one in the art world. We got to talking about why he was feeling so good. “Simple,” he said, “I’m doing what I like.”

Many of my clients report that “astrology is better than therapy,” because it helps us to zoom right into the heart of the issue like a laser, enhancing our self-understanding and giving us new insights into the root of our behavior.  But we still have to change that behavior in order to find happiness and release the past.

We often believe that our patterns of behavior and thinking are who we actually are which makes it more difficult to alter them.  But the smallest alteration in our thought patterns and accompanying reactions can take us to a new destination of greater empowerment and joy.