Sex and scandals at the Scorpio Full Moon

Sex and scandals at the Scorpio Full Moon 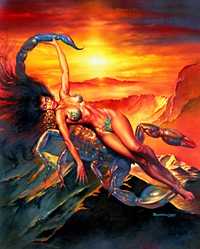 There is no equating the Schwarzenegger matter with the alleged sexual assault by Strauss-Kahn.  One scandal is an affair between two consenting adults, and one is potentially an abuse of power.  Strauss-Kahn has left a long trail of sex scandals throughout his career and fancies himself a womanizer which is likely why he thinks his claims that the sex was consensual will provide him with an adequate defense.

In other sex scandal news, a teacher in Texas was arrested on Monday, just as the Scorpio Full Moon was culminating, for having sex with five of her students.

I’m certainly not saying that the Full Moon caused these incidents, but the timing eruption of these events into the media and the collective consciousness is certainly interesting in light of the Scorpionic effect which tends to bring a fascination with sexuality and power.  In Scorpio, sex and power are linked and each is a tool to achieve the other, and the Full Moon will often illuminate aspects of the sign that it falls in.