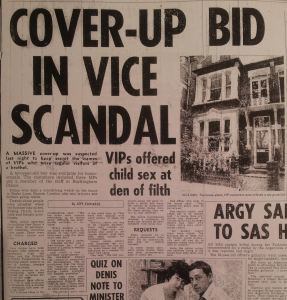 Now a sexual abuse scandal in the UK that has its roots in the 1980s has emerged, rocking the British government to its very core, revealing that high level politicians took boys and girls out of care facilities to abuse sexually.  We see the workings of Pluto in Capricorn here as well – the destruction (Pluto) of the governmental structure (Capricorn) that permitted these horrific actions to take place.  The cover-up may have extended all the way to then Prime Minister Margaret Thatcher.

The astrological timing of the emergence of the scandal is interesting since it falls an exact Saturn cycle after the alleged abuse occurred.  Saturn is the prosecutor – he presides over rules and generally demands that the line be toed.  Under Saturn in Scorpio Pope Francis has made Vatican history by implementing a justice system (very Saturnian!) against abusers of children.

Saturn’s travels through Scorpio involve a clearing in more than just sexuality – the deepest recesses of the psyche are being excavated now and there is tremendous potential for healing and deep psychological work. Those of us with an active Scorpio or Pluto emphasis in the chart are meant to live in this realm, and Saturn in Scorpio sends us back to school so that we will more willingly enter the dark side.  Those of us with lots of Jupiter or Sagittarius will be the most uncomfortable in the Scorpionic darkness, but Saturn’s teachings will be a required course nevertheless.

The human experience consists of both light and darkness, and the mission of Saturn in Scorpio is to relish that darkness and fight the light therein.