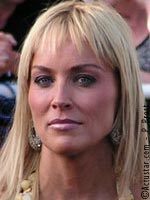 Taking a look at Stone’s birthchart, she has a Pisces Sun and therefore has a chameleon-like personality. Pisces, like the water it represents, adapts to fit its container. Pisces longs for a spiritual identity, and Sharon Stone has been a longtime supporter of the Dalai Lama. Yet Pisces can sometimes lack a strong sense of Self as a result of its extreme adaptation tendencies. When Stone was younger, she decried Hollywood’s emphasis on her beauty and desired to be taken seriously as an actress. Her Sun conjunct Mercury bestows above-average intelligence, but both are squared by the self-doubt of Saturn. This indicates a deep-rooted sense of inadequacy and shyness (Sun/Saturn), along with an intensely serious nature (Mercury/Saturn) and tendency towards depression and negativity. One biographer said that early in her life she was insecure about her appearance and an uncle bribed her to enter a beauty contest.

If this doesn’t sound like the Sharon Stone you have come to know, it’s important to remember that the personality that we see in others is shown by the ascendant, or rising sign. The ascendant is the mask that we wear to the world, and it defines how we process our experiences. Celebrity birthtimes are suspect, because they are often taken from anecdotal conversations and such. Note to astrologers: Astrodatabank has published a birthtime of 4:52 pm, but this puts the ascendant in the early degrees of Virgo which makes no sense to me. AstrolReport uses the approximate time of 4:00 pm which places the ascendant at Leo with the moon in Sag and seems more accurate. The chart I have used for Sharon Stone places her ascendant in fun-loving, self-absorbed Leo which seems like a great fit for what we know of her public persona. Leos are generally regal in appearance and often feel they are destined for greatness, just like their symbol the Lion who is the King of the Jungle. Her mother has said, “”Sharon has been posing from the day she arrived. She came out posing.” It is this very posing that can cause a Pisces to lose their own sense of self and who they are.

Pluto is rising in her chart, meaning it falls in her first house of identity and bumps up the intensity of her personality. It also indicates an individual who will continually reinvent and transform (Pluto) herself over her lifetime. Often people with Pluto rising in their charts are intimidating to others because of the intensity and power they project.

Sharon’s Mars (drive and aggressive instinct) falls in Capricorn, the sign of achievement and hard work. She is well-known in the Hollywood industry to be driven and success-oriented. Capricorn tends to be extremely practical and is not above utilizing everything available to achieve the desired conclusion. Sharon’s Mars is trine (harmonious aspect) to Pluto, showing that her individual will (Mars) and the god of power (Pluto) are in sync and operate as a unit to aid in the achievement of her goals.

Her Venus is in Aquarius, showing a certain detachment (Aquarius) to her relationships (Venus), and Venus is opposed by Uranus, which rules Aquarius. This is a “double whammy” (official astrological terminology) that shows us that this Venus/Uranus/Aquarius influence is very strong in her chart. Aquarius is idealistic and dislikes the mess of everyday life. Venus in combination with Uranus needs a great deal of autonomy and inventiveness in relationships, and this is sometimes (but not always) a marker of homosexual or bisexual behavior for that reason. This is a difficult placement for lasting partnerships because of the need for constant change and a dislike of the day-to-day messiness of human relations.

The picture that emerges is of an individual who lacks a strong sense of herself, who has learned to count on her beauty (Venus) and power (Pluto) to feed the ego needs of her Leo ascendant. Her strong drive (Mars) has propelled her into the kind of stardom that she craves, but over the long term this will not feed her need to develop a strong core within herself as she ages out of the Hollywood mainstream.

This year will not be an easy one for Sharon Stone astrologically. Transiting Pluto (transformation) will conjunct Saturn in her chart this year, shifting the sands beneath her feet as the structures that she has built for herself (Saturn) are buffeted about by the winds of Pluto. Pluto is also squaring Mercury in her chart, probably accounting for her bizarre communications (Mercury) over the past few months. Pluto dredges up all kinds of thoughts and ideas when in square (conflict) with Mercury (thoughts), making it difficult to communicate effectively. Also, because Sharon’s Mercury is conjunct her Sun, Pluto is also setting off the square in her birthchart of Saturn to her Sun and forcing her to face her own lack of depth and groundedness. Pluto acts as the will of our higher self, forcing us to evolve as human beings whether we want to or not. The changes that come are difficult and can be frightening, but when we look back we always see that they were for the best.

This would be a good time for Sharon Stone to withdraw from the public eye and do some real personal work. Until she is able to let go of the diva persona and find the nugget of true reality within herself, she will never be able to achieve long-lasting success as an actor. Sharon Stone has demonstrated the capacity to be a great character actor (just rent the movie Casino) if she can allow herself to age gracefully and accept herself for who she can be: a powerful and inspiring woman.