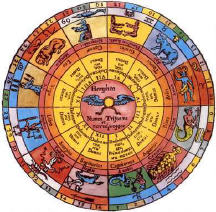 The Winter Solstice chart is not particularly significant astrologically, and will not mark a particularly powerful time of planetary energy. It IS interesting that the Solstice occurs precisely at 11:11 GMT which has numerological interest as a master number. Regardless of the trigger that we use, there is no doubt that change is afoot. We can either open to transformation willingly and allow ourselves to be repatterned into the new energy, or we can resist and become stuck in fear. The choice is ours.

December continues the pattern of the past few months with a relatively quiet planetary climate. The larger planetary cycle of Uranus square Pluto is still operative (the two are still within five degrees of an exact square formation), so the process of destruction and rebuilding with new paradigms continues to apply pressure on our individual lives as well as in the global arena. But other than this, there are no major planetary challenges this month.

A harmonious trine from Saturn to Chiron continues to provide us with an opportunity to diligently work (Saturn) on healing any wounds that hold us back (Chiron) so that we can release them and emerge with new wisdom and clarity. Chiron and Neptune continue traveling together as they have for the past five years or so, never allowing us to forget that we are soul beings having a human experience.

Uranus turns direct this month so its energy is quite strong now. Uranus governs illumination and ascension, as well as the type of radical departure from the ordinary and the rigid that is occurring now. If Uranus is aspecting your personal chart you will likely experience difficulty sleeping as well as a continual pressure to liberate yourself from any area of your life which is not serving your highest good.