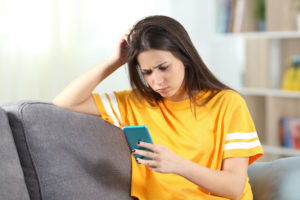 Recent news articles have warned of a growing epidemic of depression, loneliness and isolation due to social media.  While social media ostensibly makes it easier to connect with others, online contacts do not have the same quality of connection as face to face communication.  In addition, we often forget that our online presence is carefully curated to show only the highlights of people’s lives and not the backstory, and our lives pale in comparison.  This is especially true of Instagram, where professional influencers use carefully crafted images to sell products based on an idealized lifestyle.  This of course is nothing new – advertisers have been doing this since time immemorial.  But with Instagram we can potentially spend hours and hours each day in envy of the idealized lives of beautiful people and gorgeous glossy photos.

The rise of depression is especially notable in teens, who were born while Pluto was in Sagittarius between 1995 and 2008. Pluto moves through a sign approximately every 12 to 30 years, and each sign that Pluto moves through marks a new generation with a new set of issues and priorities (other posts on generations can be found here).

Sometimes called “Generation Z” and described by social scientists as being born between 1995 and 2009 (Pluto was in Sagittarius between 1995 and 2008 making this a very close fit),  this generation is finding it difficult to live in today’s Capricornian world, with both Saturn and Pluto traveling through Capricorn which is more about success and achievement.  Sagittarius bestows an open mind and an eagerness to explore other cultures – it often tends to be fascinated with the media, philosophy and religion.  Sagittarius is optimistic and needs the freedom to adventure and has a dislike of being controlled.  It’s a very social sign and enjoys influencing the opinions of others.

I started using Instagram a few years ago after tiring of the endless political tirades on Facebook.  I get my news from news outlets and don’t need to live in an echo chamber of news articles from friends with whom I’d like to stay in touch.  I’d rather see their vacation photos and pictures of their kids as they grow up than see the same news articles circulated over and over.  I enjoy looking at pretty pictures of people doing interesting things, but I can see how damaging this could be for young people, or really anyone whose life pales by comparison to the glossy curated images online.  And when you post something that doesn’t get very many hearts, it’s very discouraging.  For those without a strong sense of self, especially young people, a lack of “likes” and even worse, nasty comments posted on your photos, would be debilitating.

One of my favorite Instagrammers and Youtubers is Sorelle Amore.  Born in 1989, she’s of the Pluto in Scorpio generation which is more motivated towards personal transformation than the Pluto in Sagittarius group.   I just find her infectiously delightful and watching her always makes me happy, no matter what she’s talking about.  In her most recent video she basically says “life is not about social media – get offline and enjoy it.”  At 29, Sorelle is in the middle of her Saturn Return – a major life passage.  She was born during the Capricorn Stellium I wrote about here.  I hope that she, and others like her, will be able to serve as role models for the Pluto in Sag kids coming up behind them, and help them navigate through this social media journey.