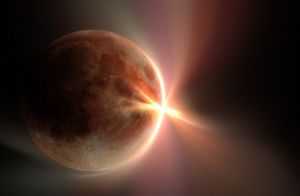 The Full Moon on December 21st is at the last degree of Gemini and it occurs on the same day as the Solstice, a relatively rare event.  There is a fair amount of dispute on the web as to exactly how rare it is: the Spaceweather site originally listed the year 1378 as the last time an eclipse fell on the Winter Solstice but astrologer Kathryn Cassidy has been setting the record straight.  The Spaceweather site now lists the year 1638, but that was NOT the last eclipse that fell on the Solstice.  The actual date for the last time an eclipse fell on the Solstice was December 22, 1703.  That was a VERY powerful eclipse because the nodes of the Moon were in a nearly exact conjunction with the lunation (the opposition of the Sun and Moon).

Eclipses occur when a lunation (new or full Moon) occurs near one of the nodes of the Moon (see this earlier article for more details). Astronomers use a wide orb of 15 degrees to define an eclipse, but when the lunar nodes are closer to the Sun and Moon the effect of the eclipse is more intense.  This eclipse is a strong one, with the lunar nodes within four degrees and Pluto within six.  So Pluto becomes part of the Full Moon and therefore the eclipse, marking the necessity for letting go and deep transformation.

The Winter Solstice occurs when the Sun enters the sign of tropical Capricorn.  The chart for the Solstices and Equinoxes are often used as a predictive tool to gauge the upcoming events of the next three months.  At the Solstices and Equinoxes the Sun moves into one of the cardinal signs (Aries, Libra, Cancer, Capricorn), resulting in a shift of attention and a sense of change. This eclipse, occuring at the Full Moon, is a time of recognition and fulfillment that leads us into the next season of transformation. We can choose to remain asleep, or we can awaken to a new level of awareness and conscious direction.

This lunar eclipse is at the 29th degree of Gemini, the degree of completion, and Gemini’s ruler Mercury is retrograde.  This is a time to assemble all of the information that has been accumulated since the New Moon and use the power of Pluto to focus and transmute any difficulty or challenges into raw power and transformation.

Mercury retrograded back into Sagittarius on the 18th, leaving the more practical sign of Capricorn.  For a few weeks the mind will be drawn more to philosophy and lofty goals, and to re-evaluate (with Mercury in retrograde motion) our values and ideals.

Just before the Solstice/Eclipse, Mercury engages with Chiron and forms a challenging square to Uranus, activating the mental realms but perhaps creating some unease in the mind.  It may be difficult to focus for a few days here, especially since these aspects are embedded in the eclipse itself.

The eclipse chart shows that the Sun and Moon are both in a tight square to Jupiter and Uranus, as is Mercury   The Jupiter/Uranus conjunction has been another major player in the planetary climate over the past year, and these two planets are still tightly aligned.  Big changes and the breaking apart of something that is no longer needed is inevitable now.  Prepare for surprises and new opportunities that can only occur when the current situation has ended.  The mind is agile and active, even though Mercury is retrograde, and a nice aspect from Mercury to Neptune helps to open the mind to the voice of Spirit within.

There is no doubt that we are living in a time of enormous change, and there is some significance to the fact that this Solstice Eclipse occurs within three degrees of the Galactic Center.  We are being primed for a period of cellular evolution, whether or not we are consciously aware of the change that is occurring.  The climactic opening occurs from the inside out and it’s quite likely that there will be no evidence of this transformation in our outer world.  It may require a quiet listening from within to experience the dramatic unfolding in its full force.