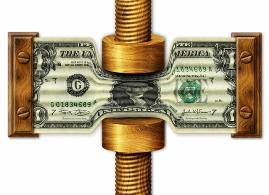 Last weekend  I watched the debate between Paul Krugman and Niall Ferguson on Fareed Zakaria’s show GPS.  Paul Krugman is a Nobel prize-winning economist and author with an expertise in international economics, and Niall Ferguson is a historian with a specialty in economics with a conservative approach to economics which include replacing a graduated income tax with a 35% sales tax and replacing public social security with a privatized system.  So it’s no surprise that these two have been engaged in a debate over how best to save the global economic system.  In some ways, they epitomize the ongoing debate on the subject.

To recap the astrological background, in 2008 we moved from an expansive Pluto in Sagittarius economy driven by optimism, debt and spending to a contracting Pluto in Capricorn economy.  For the previous fifteen years, the more people spent the more business was done, and the more jobs there were, and the more money was available for spending.  But Pluto in Capricorn is not expansive – it does not support an economy based on spending money that does not exist.  It’s practical and realistic, and sheds light on areas of illusory economic fallacies.

Here is the transcript from the CNN segment where both Krugman and Ferguson have an opportunity to defend their position. Krugman has argued from the beginning that more stimulus money is needed.  Borrowing is cheap now, and stimulating the economy will help create jobs.  Zakaria, who in my view is one of the smartest people alive today, points out the American corporations are exceptionally healthy right now, and sitting on lots of cash, and asks the question “Why are they not hiring more workers?”  Ferguson’s response to this is that corporations are worried about tax increases.  I’m not so sure either Krugman or Ferguson make sense.

Zakaria’s solution is this:

So I have a proposal, a kind of grand bargain. Have a second stimulus that is targeted, temporary and effective, and most important, announce the second stimulus coupled with an announcement from the president of a 10-year plan to tackle the budget deficit. This would include significant reductions in entitlement spending, cuts in wasteful subsidies like agriculture, and a new gas tax and a small national sales tax. These measures would dramatically adjust the budget deficit, and they would assure markets that the United States has gotten serious about living within its means in the medium to long run.

I know that we face no borrowing problems today. That’s why I’m in favor of taking advantage of the low interest rates at the moment, but I also believe that the lesson of the last three years is surely when things are out of whack you can sail along just fine for years but then the storm could hit you very suddenly. Housing prices never fell, people said, until suddenly they started crashing. Banks will never run out of money, people said, until they did. The United States has never had trouble borrowing money until one day it might.

It’s the small chance of a very bad outcome, something that economists call tail risk, and it’s something that everyone from the banks to BP to governments should all be more attentive about.

As a Libra, I like this kind of compromise thinking that covers all the bases.  But even more intelligent is our own Ray Merriman, financial astrologer extraordinaire, who has the additional wisdom gleaned from observing planetary cycles, has this to say:

Up until May, the leaders of the world were enamored with this belief in the magic of increased government spending (“stimulus bills”). Now much of the world is reversing in the opposite direction because they see that hasn’t worked as promised. As stated by J. Anthony Boeckh, in his excellent book titled “The Great Reflation” (John Wiley & Sons, 2010), “In a debt supercycle, the gap between expectations and reality becomes enormously exaggerated. Not surprisingly, the end comes as a sudden shock. It is as though termites are eating away at the support beams of your house. You don’t notice anything until the structure (Saturn) gives way.”

The new key word now is “austerity,” and getting the exploding national (and world) deficits under control. It is all Pluto-in-Capricorn themes. But the kind of intensive austerity measures being propagated by the International Monetary Fund are just as dangerous as the out-of-control spending behavior of the United States. But both fit equally well with the historical political and economic themes that have occurred in the past under the waning phase of the Saturn-Pluto cycle (2001-2020). The IMF wants debtor nations not just to stop spending, but also to raise taxes, which has virtually no hope of growing the economy of debtor nations. To the contrary, such policies will probably plunge those nations – and the world – into a major depression. Of course, that is the usual outcome during this phase of the Saturn-Pluto cycle, at the same time we enter the 80-90 year Cardinal Climax. This configuration last happened also in 1928-1934.

So what should be done? I think CNBC market commentator Rick Santelli may have had it right last week. He is one who correctly called this financial debacle long before it happened, and now screams the solution as: “STOP THE SPENDING! STOP THE SPENDING! STOP THE SPENDING!!!” Dr. Peter Morici of Smith School of Business may also have it right when he stated last week, “President Obama’s policies are not creating conditions for businesses to hire.” And the headline of Friday’s Employment reports blared out: “Job Losses Are the Latest Sign Recovery Losing Steam.” So what happened, and why aren’t these policies working for more than 13 months?

The key is to get people back to work. The 9.5% unemployment number is completely misleading as more and more people are dropping out of the labor force, making this terrible number look only half as bad as it really is. But the only sector hiring people and growing their labor force is the government itself (even excepting the temporary census workers). If you want to increase productivity, you need the small business and manufacturing sectors to hire people. But they aren’t going to do that until their tax situation is clarified. This is one of the remedies for the downside of the Saturn-Pluto cycle too. But can leaders of the world humble themselves enough to restructure their policies that might lead to growth and the end to this cycle of economic fear? Many are. But not all, unfortunately.

Maybe, just maybe, if more governments (like the USA) stopped the spending and put a freeze on any new taxes, especially concerning small businesses that are needed to hire people, nations would break away from the very policies that are usually present under hard geocosmic signatures like this. For instance, try eliminating taxes on dividend income, put a freeze on any new taxes for small business for the next two years, put a meaningful freeze immediately upon any new government spending until the trend changes regarding deficits, and watch what happens to the economy. Payrolls would grow, deficits would eventually shrink as more tax revenues would come in, and the stock markets of the world would soar in response. It would reverse and break this current cycle.

The problem that economists face is that they are looking backwards without the benefit of an understanding that we are in a completely different environment now under Pluto in Capricorn.  The things that worked under Pluto in Sag are no longer effective.  This is a Capricornian era of personal responsibility, shouldering the hard burdens, and building a strong foundation.  This will be all too clear next month under the final square from Saturn to Pluto.