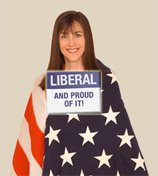 I’ve been wanting to profile a woman here, and there haven’t been many women in the news lately. I want to cover Barbara Boxer and Dianne Feinstein at some point, and I thought a noble first choice would be Christiane Amanpour who is just so fabulous. I also considered the annoying Rita Crosby. But then I decided it was most appropriate for my first female profile here to be Stephanie Miller.

From the first time I listened to the Stephanie Miller show I was hooked. She has an amazing way of taking depressing and frustrating news and making it funny and easy to digest. From the beginning, I looked for excuses while at work to get in my car so I could listen to the show. I scheduled appointments for afternoons so as not to miss the show. Finally, so as not to miss another show, I invested $300 in an mp3 player and purchased the podcast on the first day it was available. Evidently I am not alone, because in little more than a year the Stephanie Miller show has gained about a million listeners. From her roots in stand-up comedy she has forged a brilliant career as a liberal talk show host.

It’s difficult to do birthcharts for celebrities because we are counting on the accuracy of the bio birth times which are notoriously inaccurate. Since writing this Stephanie sent me her accurate birth date and birth time and I have updated the details.

Steph was born with the Sun in Libra (as was your faithful blogger here). Those with a Libra Sun have the blessing and the curse of a natural ability to charm and attract others because Libra is the sign of relationship. Ruled by Venus, the mission of Librans is to achieve the fine balance of developing the individual sense of self while being in relationship to others. Mars in her chart is also in Libra, showing that she has a strong drive (Mars) to achieve harmony with others (Libra). The strong Libra influence makes her an excellent negotiator and able to easily influence others.

Stephanie’s Moon is in Gemini, the sign of the natural talker making her a perfect candidate for talk radio! Those with the Moon in Gemini tend to be independent and somewhat freewheeling, they don’t like to be tied down and need to be able to communicate (Mercury) their feelings (Moon).

Stephanie has Scorpio rising, giving her a boost of intensity that Libra doesn’t typically demonstrate. In addition, she has Mercury conjunct Neptune, both in Scorpio, showing that she has a strong imagination (Mercury/Neptune) and a probing (Scorpio) intelligence (Mercury) that delves deep below the surface to discover what is truly going on behind the scenes.

Jupiter is conjunct Saturn in her chart, both in Capricorn. Saturn rules Capricorn, so Saturn in Capricorn finds its fullest expression in hard work, discipline, and a laser focus on building success. Jupiter in Capricorn tends to bring good fortune (Jupiter) in all earthly endeavors (Capricorn).

Steph began her broadcasting career after the death of her father, Republican representative from New York who ran as Barry Goldwater’s running mate. Stephanie underwent a number of transits of Pluto and Chiron to her natal chart from 1983-1986, and it was during this period that she first was heard on the radio. Often the death of a parent can be overwhelmingly painful and fraught with complex emotions, yet out of the ashes of the pain of that death we often find ourselves transformed into individuals with greater power and effectiveness, particularly if we were overwhelmed by those parents during our earlier years.

Thank you Stephanie Miller, for being a “voice of reason in a world of treason,” “the aggressive progressive,” and for making me laugh because without your show, as you say, I might cry all day.