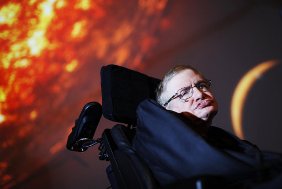 Hawking’s Sun is in achievement-oriented Capricorn, and he has a Grand Trine of planets in earth that includes Mercury, Uranus and Neptune. Uranus opens his mind (Mercury) to fresh new insights, and Neptune adds a creative note which helps to raise his mental abilities.  Hawking was an underachiever in college until ALS began to rob his physical body of its abilities, after which time he began to work hard and focus all of his energies through the mind.  He is now thought by some to be the smartest man in the world.

Uranus in Hawkins chart conjoins Saturn, a combination that requires a balance of one’s radical and individualistic (Uranus) nature with the more structured rules of Saturn.  Often individuals with this combination of planets tend to embrace one over the other and a war between the two impulses can result.  Hawkings was first diagnosed when he was 21 years old – an age at which transiting Saturn forms a square to Saturn in the birthchart at the same time that Uranus squares the natal Uranus.  This is a big time of change for every human being, but with Saturn and Uranus conjoined in the birthchart it took on greater force and likely drove all of his focus towards the aspect of his personality which worked well, which is the Grand Trine involving Mercury.