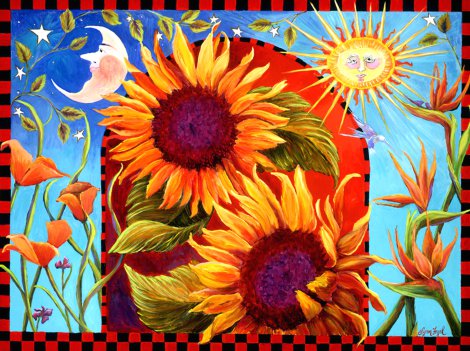 While custom dictates the Northern Hemisphere celebration of the Summer Solstice and the first day of Summer on June 21st, the use of the tropical zodiac places the entry of the Sun into the sign of Cancer on the longest day of the year.

Cancer is one of the “cardinal” signs – the signs that are directed towards action and leadership.  Each of the cardinal signs marks the turning of the seasons: from the Summer in Cancer we move into the Autumn of Libra, followed by the Winter of Capricorn and the Spring in Aries.

During the solstice the Sun appears to stand still as it beams its nourishing light across the northern Hemisphere.  The energy of the Sun feeds us and is crucial for our vitality, and the Summer Solstice offers a peak of creative potential.

The chart for the Solstice can reveal a great deal about the next three months, and this year the Solstice chart is marked by Uranus, Pluto and Mars, locked tightly in an energetic alignment that continues to foster the completion of a breakdown of the old order (Pluto in Capricorn) and the beginning of something entirely new in its place (Uranus in Aries), facilitated/aggravated by Mars in Libra.  (You can learn more about the Uranus/Pluto square in the sidebar of this blog.)

The sign Cancer is ruled by the Moon, and the Solstice Ruler adds its own mark on the Summer Solstice.  This year the Solstice Ruler is exactly conjunct the South Lunar Node, the point marking the past, suggesting that unresolved issues are likely to take center stage now.  With Mercury retrograde as well as several other planets (see this earlier article for more information on this topic), understanding the past is more crucial than ever.  Sometimes in order to understand the past we must actually journey there.

These planetary energies have been incredibly intense since 2008 – a very long period of time.  The Summer Solstice can be a turning point as the illumination of the Sun helps to clarify life situations that may previously have been murky and dark.  It is therefore a time not only to celebrate, but also to meditate on the inner light – the Central Sun that resides within us.  As we become more aware of the radiation that fills our souls and our inner world, we can more easily radiate that light into the world around us.