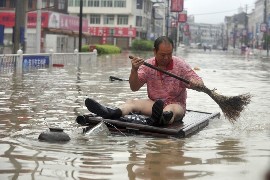 Wildfires in Russia are claiming 700 lives a day.  Floods in China and Pakistan threaten not only lives but also the region’s political stability.  Icy cold temperatures in South America have killed dozens of people in a region that is not accustomed to this kind of cold.  And a gigantic “ice island” has broken off the Greenland glacier, sending a sheet of ice four times the size of New York into the open Atlantic.

Global warming?  Or just another effect of the Cardinal Drama?

This summer’s weather tragedies have not surprised astrologers.  The astrological chart for each solstice and equinox reflects to some extent the type of weather that we are likely to experience that season, and this Summer Solstice chart was a doozy.

As reported in this blog, the Solstice Sun was in an exact square aspect to Jupiter and Uranus at zero point Aries, the first of the fire signs.  Looking back, we can see how the Jupiter influence in Aries might correlate with a rapid spread/expansion (Jupiter) of wildfires (Aries).  But with the Solstice Sun at zero degrees Cancer in a trine to Chiron (wounding and healing) at zero degrees Pisces, there is a strong water component to the chart as well.  But that water element is challenged by the fire element, and we can see that reflected in global weather patterns such as in Moscow where the dry fire has overcome the water element, and in China and Pakistan where the water element has overcome the fire.

Pluto was also strong in the Solstice chart, opposing the Solstice Sun adding a note of life-changing intensity and danger, and Saturn was within range as well forming the fourth limb of the Grand Cross.

These weather extremes will have long-lasting effects in terms of food availability and global hunger, and this will tie into the upcoming square of Uranus in Aries (rebellion and war) and Pluto in Capricorn (destruction and realignment of power centers).

It doesn’t look like the global situation will lighten up any time soon, with the Sun again exactly square Pluto and conjunct Saturn in the chart for the Autumn Equinox.  But there is an interesting triple conjunction of the Moon, Jupiter and Uranus in Pisces in that Equinox chart that suggests a new  (Jupiter/Uranus) way of approaching old problems that may bring some relief to the unrelenting negativity of this summer’s mood.