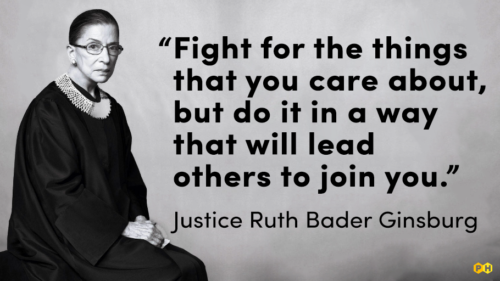 Ruth Bader Ginsburg was a fighter for freedom and equality from a very young age.  Her natal astrology chart shows that although her Sun was in Pisces, which is typically not seen as the sign of a strong voice of courage, it was strengthened by a trine from Pluto, the planet of transformation and renewal. (Its darker side tends to come out more strongly in the challenging aspects such as a square or opposition.)   Her Scorpio Moon added a layer of passion and tenacity, and her Moon was squared by Saturn, planet of hard work, discipline and achievement.  She was unrelenting in her force for change, yet with both the Sun and Venus in Pisces she was compassionate and sensitive to the plight of the underdog.

We don’t have a birth time for her so we don’t know her ascendant (rising sign) which would be a good indicator.  Some have speculated that Aries was rising in the chart because she was such a warrior, but she always fought her battles with humor and a sensitivity which is not often seen in an Aries ascendant.  But Mars, the warrior planet, conjoined her South Node of the past suggesting that the fight to confront injustice was a karmic influence, something that drove her from the beginning of this life and probably others.

Many of us in the US are in despair at this time, but I feel it’s important to remember the bigger picture.  With the US entering the heart of the Pluto return over the next three or four years, things are likely to be rocky.  In the meantime though we can do what we can to support our communities and take care of the people around us.  If enough of us do that, we can make a real difference.