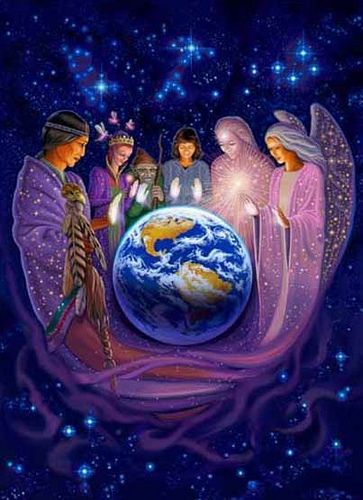 I first posted this after the election in 2008, and reposted it in 2013. Since the U.S. midterm elections are this Tuesday, and affected by a powerful eclipse, I thought it might be worth a revisit. If you have the time, please take a listen to listen to Tina Malia’s beautiful voice of healing and inspiration at the bottom of this post..

In “Leading with Vision and Trust”  Warren Bennis writes:

Why did India’s poor march to the sea with Gandhi against the salt tax? Because they trusted him. Trust is based on predictability: trusted leaders make themselves known and make their positions clear. Four leadership qualities together engender trust:

Leaders manage the dream: they have the capacity to create a compelling, over-arching vision that takes people to a new place.

A vision is a portrait of the future that grabs. Initially it grabs the leader, and then their magnetic intensity and commitment to it draw others in. Leaders love what they do. The passion that comes from knowing what they want, that is demonstrated by their unswerving commitment to a vision, communicates hope and inspiration.

Visions animate, inspire and transform purpose into action. Visions bring about confidence and a belief in others that they are capable of performing to their full potential.

Believing in one’s dreams is not enough. Without communication nothing can be realised.

Communication creates meaning. Mismanagement of meaning and lack of clarity only lead to evasion of responsibility and guilt.

Leaders must be able to influence and organise meaning, and to focus more on thinking than “facts” or “knowing”, on the “know-why” before “know-how”. Shared meanings and interpretations of reality facilitate coordinated action. Unequivocal communication of the message is key to aligning any group behind an organisation’s goals.

When I first published this post after the 2008 election I and many others were filled with the hope that a single leader could accomplish all of this and more.  However, Pluto in Capricorn requires that we face the realities of the world around us – a complex world of artifice and subterfuge in which the idealist can barely survive.  A shadowy network of lies and manipulation continue to create pain and suffering for many, and at times we seem to be slipping even further from the healing and abundance that we all crave.

Still, each one of us has the power to create our own light and majesty – to open doorways of opportunity and love and transform not only our lives but the lives of those around us.  In the Piscean age, most of  humanity surrendered (Pisces) their own will to follow blindly in the path of strong leaders of the world’s four major religions.  As we move into the Aquarian Age, we must be our own leaders.  We are the ones who are responsible for the world – not only our personal world, but also the great humanity of which we are a part.