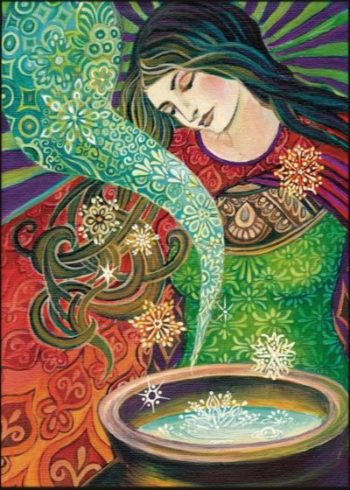 Saturn and Pluto are bearing down on the Saturn system in my own chart, and I am really focused right now on the idea of presence and surrender because with Saturn and Pluto there really is no other choice.  I so love this writing from Rainer Maria Rilke, which speaks of the ways in which we can use our negative emotions as a doorway through which to find the alchemy of personal transformation. (art by Emily Ballivet)

It seems to me that almost all our sadnesses are moments of tension, which we feel as paralysis because we no longer hear our astonished emotions living. Because we are alone with the unfamiliar presence that has entered us; because everything we trust and are used to is for a moment taken away from us; because we stand in the midst of a transition where we cannot remain standing.

That is why the sadness passes: the new presence inside us, the presence that has been added, has entered our heart, has gone into its innermost chamber and is no longer even there, is already in our bloodstream. And we don’t know what it was. We could easily be made to believe that nothing happened, and yet we have changed, as a house that a guest has entered changes. We can’t say who has come, perhaps we will never know, but many signs indicate that the future enters us in this way in order to be transformed in us, long before it happens.

And that is why it is so important to be solitary and attentive when one is sad: because the seemingly uneventful and motionless moment when our future steps into us is so much closer to life than that other loud and accidental point of time when it happens to us as if from outside. The quieter we are, the more patient and open we are in our sadnesses, the more deeply and serenely the new presence can enter us, and the more we can make it our own, the more it becomes our fate; and later on, when it “happens” (that is, steps forth out of us to other people), we will feel related and close to it in our innermost being. And that is necessary.

It is necessary – and toward this point our development will move, little by little – that nothing alien happen to us, but only what has long been our own. People have already had to rethink so many concepts of motion; and they will also gradually come to realize that what we call fate does not come into us from the outside, but emerges from us. It is only because so many people have not absorbed and transformed their fates while they were living in them that they have not realized what was emerging from them; it was so alien to them that, in their confusion and fear, they thought it must have entered them at the very moment they became aware of it, for they swore they had never before found anything like that inside them.  Just as people for a long time had a wrong idea about the sun’s motion, they are even now wrong about the motion of what is to come. The future stands still, but we move in infinite space.