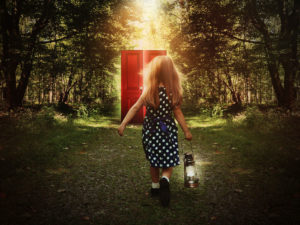 I really like that movie Sliding Doors in which one person’s life is split into two pathways.  In one, she catches her train home and finds her boyfriend in bed with another woman and her life takes her in one direction.  In the other, she misses her train, doesn’t catch her boyfriend in flagrante delicto, and ends up in a completely different direction.  In the end, however, both lives end up in the same place.

In Ray’s story,  both men had problems with alcohol.  One had already taken the path of seeking sobriety, and the other was reacting rather than approaching the problem proactively.  The man who had been arrested had sought a reading with Ray, so we can assume that he was looking for some answers which is the first step on the journey to healing and transformation.

We can never really predict how any given astrological factor will manifest.  One individual with Pluto (power and the destructive/regenerative force) on the Midheaven, the cusp of the house that rules our vocation and public life, will consistently engage in power conflicts at work, causing him to be fired over and over.  Another will suffer through a few of these events and eventually branch out on their own and run their own company.  Is this due to free will, or, as some astrologers argue, is it their fate to have greater control over their own destiny?

I don’t think we will ever know the answer.  For myself, if everything is predestined there doesn’t seem to be much purpose to human existence which I find a very depressing thought.  In my own life I have been presented with situations that have continued to repeat themselves until I made a different choice and transformed my life in the process.  To me, THAT is the meaning of life and the real source of joy.