Susan Boyle: The meltdown and her next chapter

Susan Boyle: The meltdown and her next chapter 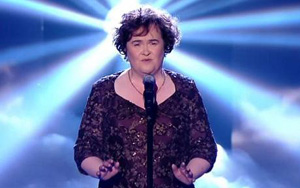 The meteoric rise of Susan Boyle has been like a fabulous firework which rockets into the sky out of nowhere, explodes itself across the heavens, and then falls to earth again forever changed.

You can read more about Susan’s birthchart and astrological profile here, and about how the current planetary cycles affected her meteoric rise.

Over the past week there were signs of trouble; stories of meltdowns and of Susan being rushed to a safe house where the stress wouldn’t overwhelm her ability to compete in the final round of Britain’s Got Talent  last night.  As mentioned in my profile of Susan, she has a sensitive opposition between the Sun (conscious mind) and the Moon (emotional sensitivity) which shows a tendency to be somewhat reactive emotionally. This is exacerbated by a square of Mars (aggression)  to the Moon and Sun, especially because her Mars is in the nurturing sign of Cancer where its aggressive instinct does not get a strong outlet.  There is often a pattern of resentment and built-up anger that results.  This is particularly true for someone like Susan with an Aries Sun, ruled by Mars, who needs to be able to clearly express that inner aggression.  This is not the chart of someone who responds well to stress.

At the time of these meltdowns Susan was experiencing a transit of Mars over her Venus. Venus describes the way we interact with others, and Mars of course expresses our aggression and our ability to defend ourselves, so when Mars hit her Venus exactly on May 27, there was an eruption.

The Midheaven is the point in the chart that describes our career and public life, and in the progressed chart (the evolving chart that shows how our career life changes) her Midheaven is nearly exactly squared by Pluto, the planet of transformation, right now.   Pluto cycles change our life forever, but not always the way we choose.

We have seen in American Idol that it is just as often the runners up that have the most spectacular career success.  The problem with becoming an overnight sensation is that one does not develop the inner resources (Venus) to be able to manage the personal attention and exposure of fame.  Susan Boyle has a fabulous voice, but she lacks the people skills and the tough skin required to launch an immediate career in the public eye. Hopefully she will be able to use her talents in a way that will help her to evolve both personally and professionally.