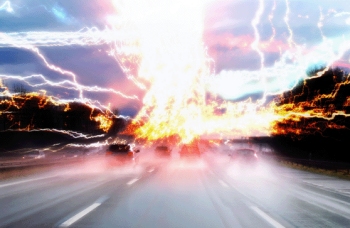 Unless you’ve been living under a rock, you know that popular mythology says that the Mayan long count calendar will end on December 21, 2012 and therefore the world will probably end too.

Many cultures break the aeons of time into smaller and more manageable cycles.  The ancient Hindus described these cycles as Yugas, of which there are four, each with its own qualities.  We are currently in the Kali Yuga which began somewhere around 3102 bce, and which will last for another 400,000 years or so.  The current Mayan calendar period of 5126 years, or B’ak’tun, began in 3114 bce. The synchronicity of these beginning dates is especially interesting when we consider that this is around the time of the surge of more sophisticated civilizations around the world.  But the Mayans believed there were 20 B’ak’tun cycles, so we have a ways to go before the entire cycle ends according to the Mayans.  That date is the end of the 20th B’ak’tun, which occurs on October 12, 4772.

At any rate, the 13th B’ak’tun is set to end in December of 2012 and then resets itself to the 14th B’ak’tun.  The commonly used date of December 21, corresponding to the Winter Solstice, is somewhat coincidental and depends upon the correlations used to adapt the Mayan calendar to the Western calendar.  Some scholars believe that the 13th B’ak’tun will end on December 20th and the 14th will begin on December 21.  Some New Agers want the end of the calendar to coincide 12/12/12 for the numerological effect.

I am often asked what the astrological correlations are between the Mayan calendar and our Western astrology, and the answer is truly – there are none.  While we […]

Philip Sedgwick has a post on his new blog at Matrix that is chock full of interesting points to share.  Philip is an interesting astrologer – he was one of the first astrologers to work with the Galactic Center point which was so much in the news over the past few years as Pluto made a conjunction to it.  He is still exploring realms outside the boundaries of ordinary astrology, looking for ways to integrate the new Solar System into the astrological language.

Philip wrote an election blog for Huffington Post last year, and his commentary on that experience made me very glad I was picked up by Beliefnet and not, say, the New York Times which frankly was my fantasy.  It just shows that the Universe knows what’s best.  At any rate, Philip’s experience was not very enjoyable:

In honor of Mercury’s impending retrograde, allow me to back up first. Last fall I had the pleasure of writing a blog regarding election polling and the upcoming U. S. Presidential Election for the Huffington Post. My posts appeared under a subcategory entitled Huffpollstrology. But when I started writing for HuffPo, the first post was placed in the column with the standard array of mainstream bloggers. Oh my! I discovered that despite the stats about the general public loving to read sun sign columns, approximately 80% of the comments received about my first post were hostile, hateful and ignorant of the topic they condemned, which in the realm of blogging has nothing to do with anything. The ridicule came in from the obvious religious quarters, those who despise superstition and well educated and/or intelligent folks who condemned the idiocy of those who put credence into astrology. The spiteful comments continued through the tenure of my columns leading up to the […]