Mars Retro and the Protests in Iran

Iran is in the news again as new anti-government protests result in a tough crackdown by that country’s military.  The Wall Street Journal writes: “Authorities appear concerned that the protest movement could pick up new steam after Monday’s demonstrations. Students have revitalized protests that erupted after the June re-election of President Mahmoud Ahmadinejad, which the opposition says he won by rigging the vote.”
I’ve written several posts (see the one from June here and the one from September here) about the astrology of these protests, mostly relating to the transit of Saturn (constriction) and Uranus (revolution) which have both been challenging Mars (anger and war) in the chart of Iran.  In those cases Saturn was equally powerful to Uranus and the crackdowns were successful.
That may not continue, however, because as transiting Mars, which stimulates aggression and loosens the restrictions that we keep on our anger, slows down to make a “station” (standstill) in a tight conjunction to the ascendant in the chart of Iran, the aggression that is simmering under the surface in the people will continue to erupt throughout the month of December.
Transiting Uranus will return to irritate the anger of the people in February through April as it returns to make the final  challenging conjunction to Mars as well as Mercury (thoughts and ideas) in the Iran chart.  Transiting Jupiter (expansion and freedom) will step in beginning in May and exacerbate the situation and at the same time, transiting Uranus (stimulating rebellion and the quest for authenticity) will harmonize with Jupiter (religion and ideas) in the national chart.
Taken together, there is a lot of energy […]
Share this article...
By Lynn Hayes|2009-12-09T16:51:03-05:00December 9th, 2009|Astrology|Comments Off on Mars Retro and the Protests in Iran
Read More 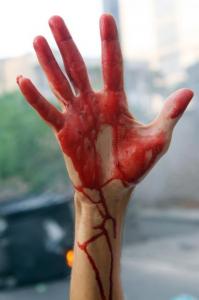 Just after the opposition between Saturn and Uranus culminated last week, tens of thousands of protesters filled the streets of Tehran on Friday in a rare show of opposition against the pro-Palestinian rhetoric of Iranian president Ahmadinejad whose anti-Israeli speeches on Jerusalem Day gave rise to chants like this one:  “Not Gaza, Not Lebanon, I’ll sacrifice my life for Iran.”

Tension has been fomenting in Iran since the Iranian elections in June when Ahmadinejad won in a widely disputed landslide over challenger Hussein Moussavi, and we can see the events on the ground reflected in the astrological signatures.  The progressed Sun (national identity) in the chart of Iran last year conjoined Chiron (sensitivity and wounding/healing) at the very top of the chart, the point that we call the Midheaven, the point that represents the national government and its place in the world community.  Iranian dissidents are more and more sensitive now to their place in the global environment, and more and more open in their disdain for the oddly apocalyptic ideas of their President.

We are in the third phase of the opposition between Saturn and Uranus, and this conflict between the desire to return to the safety of the past (Saturn) and the desire for that which is new and revolutionary (Uranus) is clearly seen in the leadership of Ahmadinejad.  He is both a  revolutionary (Uranus) and a reactionary (Saturn), wanting to return to repressive conservative values (Saturn) while blowing Israel off the map (Uranus).  This phase of the opposition of Saturn to Uranus is aspecting exactly Mars in the chart of Iran.  Mars is the warrior – the aggressive instinct that seeks self-preservation and the gratification of desire.  There is a tremendous amount of anger in that […]

More on the astrology of the new Iranian Revolution

Most news reports are now speaking of revolution in Iran.  As I wrote a few days ago, transiting Uranus (revolution and sudden change) is passing right over Mars in the chart of the Islamic Republic of Iran.  Nancy Waterman writes:

Mars in this chart is in the 8th house and ruler of the 9th house (Aries cusp), the Sun (in Aries), and co-ruler of the 4th house (Scorpio cusp). Thus, this transit is shaking up the rulership of the country (the Sun), bringing the feel of deeply hidden rancor coming out into the open and causing transformation (8th house), and convulsing the people and the foundation of the country (4th house). In addition, there is the inflammation, anger, confrontation, and sudden eruption of rebellion and violence inherent in a Mars/Uranus combination. This transit will continue through late August, exact on August 23, and then return in February 2010. It has been intensively activated by the transits of the Sun (25 Gemini) and Mars (10 Taurus) in the past few days, culminating around 7:30 PM local time on June 17 with the exact square of transiting Sun and transiting Uranus.

Looking a little more deeply into the Iran charts, this revolution, if that’s what it becomes, likely has its roots in the conjunction of the progressed Sun (the national identity) in the Iran chart to Chiron (the wound to the soul) back in March of 2008.  Mahmoud Ahmadinejad was elected in 2005 as a populist – someone who understood the common people.  Instead, he imposed cultural restrictions on the rights of women and forced university professors and scientists to retire.  His promises have not come to pass, and many Iranians want a change that comes with more personal freedom and liberty.

We see this desire for liberty with the transit of […]