Autism and the incarnation process

Sorry to be a bit stuck on this topic, but I found this while researching the astrology/autism connection and thought this might interest my readers.  It’s from an article written in 2000 by astrologer Sandra Weidner:

We are all incarnated. Any one who has looked upon the body of a deceased loved one–unless too shattered from grief to see–has the clear sensation, “he/she is no longer in this.” We are Life which has assumed material form in order to enter a material world. For a time. For certain purposes. The spiritual is never as limited as the material. To come here, we have to take on limitations. For one, a body is required. It represents one part of our admission ticket. The other is formed by our group as well as individual reasons for coming….

So, yes, we are all incarnated. Some of us, however, are more incarnated than others. Our physical bodies make it appear we are all equally here. We are not. Autistic children are one of the groups of people who are less here. Their physical bodies are here; their identities are considerably somewhere else. Most families of autistic children already know that. They just cannot explain why. Here, using this universal language of creation–astrology–it becomes understandable. …

Here’s where it gets really interesting:

I borrow from the work of Jungian psychologist, Erich Neuman. It is from his book, The Child:

The young of the higher mammals are born in a state of relative maturity; either immediately or shortly after birth they are small adults which not only wholly resemble adult animals but are also capable of living unaided. In order to attain a similar state of maturity the human embryo would require a pregnancy of from twenty to twenty-two months. In other words, the human child, after the […] 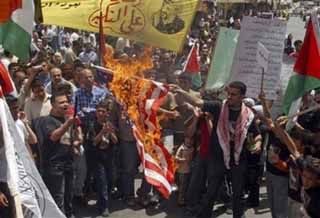 Israel is continuing its attacks in the Gaza strip for the third day today, striking at a security  compound, a mosque, a university, and a network of smugglers’ tunnels, Israel was apparently reacting to rocket strikes by Hamas forces, but the cycle of violence is all too familiar.  Israel reacts with overwhelming force, attempting to squelch the power of the Palestinian military capabilities and restrict the freedom of the Palestinian people to move about the territory.  The Palestinian military wing, Hamas in the current situation, reacts with calls for more suicide attacks on civilians in Israel.  Israel says there will be no peace talks until attacks by Hamas end, and Israel continues to expand its settlements into Palestinian territories.  Meanwhile, rage against Israel and the West in the surrounding Arab nations continues to grow.

Whatever side of this argument you are on, there is no denying that neither side wants peace.  They are locked in a battle that has no end – a battle where the lines are blurred between victim and perpetrator.

I’m just finishing an interesting book by Liz Greene entitled Dark of the Soul: Psychopathology in the Horoscope There is a chapter on the scapegoat pattern as a psychological complex.  In the story of the scapegoat, the ancient Hebrews sent a goat, designated as the carrier of the sins of the collective, into the wilderness to perish and thereby save the collective from punishment.  The story of the Christ as the sacrificial lamb who perished for the sins of the collective perhaps comes from the […] 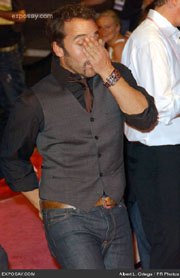 Jeremy Piven has left the Broadway production of Speed the Plow after being diagnosed with mercury poisoning.  Piven, who apparently eats lots of sushi and eats some kind of fish twice a day, sought medical treatment for exhaustion and excessive fatigue.  He was found to have elevated mercury levels that were five to six times the normal level.

Clearly, this is a medical condition rather than a psychosomatic one.  But the timing of it is interesting in light of Saturn transits that Piven is going through right now.  Jeremy Piven (born 7/26/1965, time unknown, NY), like others of his generation, has Uranus and Pluto conjunct in his birthchart.  The conjunction of Uranus (revolutionary change) and Pluto (death and transformation) in the mid-1960s was a time of tremendous cultural transformation and radical change, and those individuals born between 1963 and 1968 carry this archetype in their chart.  In Piven’s case, the planet Saturn is opposite Uranus and Pluto in his chart, signifying an inner battle between that force for transformation (Uranus/Pluto) and the need for conservative application of diligence and effort (Saturn).

When we have a major planetary system like this in our birthchart, a transiting planet affecting one of the planets in the system has a longer-lasting effect on the entire system.  In Piven’s case, transiting Saturn made a pass over Uranus and Pluto in his chart in September as he was preparing for the opening of the play, and by October when the play opened Saturn had moved to a point exactly opposite Saturn in his birthchart.  A transit of Saturn to Saturn’s place in the natal chart occurs every seven years and generally stimulates a challenge of some kind.  Very little […] 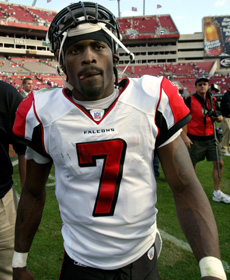 Michael Vick plead guilty today to dogfighting charges at the state level after serving nearly a year for federal charges.  The horrific nature of these crimes, which as an animal lover I cannot bear to repeat in this column, led me to investigate his astrological chart (born 6/26/1980, time unknown, Newport News VA) to look for clues to his behavior.  I am in no way excusing the actions of criminals in this kind of chart research – Vick’s chart did not doom him to cruelty and he always had the choice to choose a different path.

The psychospiritual development of a human being is the result of a combination of the psychological and spiritual factors in the birthchart, the family environment, and the choices that we make at every moment of our lives.  The raw material in a birthchart will not help us to predict which individuals will become psychopathic criminals and a criminal may share a birthchart with a brillliant philanthropist.  It is easier to look back and see clues in the birthchart that can help to explain where the psychopathic behavior originates.

In the case of Michael Vick, his Sun is in Cancer, the sign of emotional sensitivity.  Cancer is a difficult sign for a man – its extreme sensitivity often does not easily find expression in most societies where men are expected to be strong and emotional sensitivity often becomes buried.  Obviously, there are many Cancer men who have successfully integrated the need for caring into their lives but for Michael Vick the Cancer is a starting point in an analysis of a personality which has not integrated this dynamic.

Thanks Elsa for this interesting video featuring financial astrologer Henry Weingarten as well as psychic readers of various types. (Also see the article in Sunday’s New York Times on the same subject.)