The Bible may have been written long before history suggests

This article in Live Science suggests that the Bible may have been written much earlier than previously supposed:

Scientists have discovered the earliest known Hebrew writing — an inscription dating from the 10th century B.C., during the period of King David’s reign.

The breakthrough could mean that portions of the Bible were written centuries earlier than previously thought. (The Bible’s Old Testament is thought to have been first written down in an ancient form of Hebrew.)

Until now, many scholars have held that the Hebrew Bible originated in the 6th century B.C., because Hebrew writing was thought to stretch back no further. But the newly deciphered Hebrew text is about four centuries older, scientists announced this month.

“It indicates that the Kingdom of Israel already existed in the 10th century BCE and that at least some of the biblical texts were written hundreds of years before the dates presented in current research,” said Gershon Galil, a professor of Biblical Studies at the University of Haifa in Israel, who deciphered the ancient text.

read more here…
The dating of the origin of human civilization keeps being moved back into the mists of time.  I suspect there is much more to know about these early days of our religious history than we are led to believe!
A reader comments: Scholars largely believe that the earliest portions of the Bible, i.e. the Torah were redacted and edited and made into a single book as we know today starting around the 6th century. But that text was being put together from earlier sorces both oral and written. My problem with articles like these is how misleading they are. Because of course most people, who aren’t scholars of Hebrew language and the Bible won’t know any better but to […]
Share this article...
By Lynn Hayes|2018-06-11T09:53:43-04:00January 16th, 2010|Religion|0 Comments
Read More 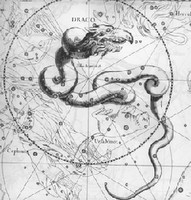 Elsa had a link the other day to a site called Astrococktail that has a great collection of news links with astrological connections. From that site I found a link to the works of Chrichton Miller, who speculates that the Celtic Cross was an instrument for astronomical calculation, and that the ancients knew the locations of many of the constellations by using the Celtic Cross.

I then found this interesting page, The Stars of Revelation, from which I quote the relevant passages of Revelation regarding the Dragon:

[Rev 12:1-6] [A]nother portent appeared in heaven; behold, a great red dragon, with seven heads and ten horns, and seven diadems upon his heads. His tail swept down a third of the stars of heaven, and cast them to the earth. And the dragon stood before the woman who was about to bear a child, that he might devour her child when she brought it forth…

Later, there is a war between Archangel Michael and the dragon: