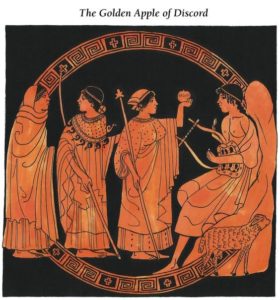 Eris is a small planet which was discovered in 2003.  Her Roman name was Discordia – she is the goddess who, when not invited to a wedding, began the Trojan War by throwing a golden apple marked “for the fairest” into a circle of goddesses, beginning a dispute that threw Greece into turmoil for ten years.  (Read more about the mythology of Eris here.)  Eris moves very slowly – its orbital cycle is 560 years which is more than twice as long as Pluto’s orbit – so its influence appears to coincide with small, seemingly minor, events which create great chaos and disrupt the status quo.

The symbolism of Eris as the goddess who became angry when she didn’t receive a wedding invitation and retaliated by starting the Trojan War was eerily reflected in the fact that the discovery of Eris correlated to the time when a hanging chad changed the fate of US history and ushered in 20 years of war.  You can see that she’s a wild character under which seemingly random incidents change the course of history.

Uranus in Aries conjoined Eris between 2015 and 2017, and I wrote about that here before Trump was elected.  Uranus and Eris are both disruptors, but where Uranus seeks to disrupt our lives where we have become stuck, Eris seems to disrupt just for the sake of shaking things up to see where everything will land afterwards.  At the time I wrote:

Under this influence (until early 2017), the very fabric of our lives is being shaken and stirred and it will be ever more necessary to find ways to adapt.  The world is changing – we are at […]