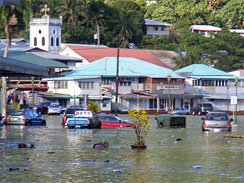 The earthquake yesterday in Samoa was a severe one, with a magnitude of nearly 8 on the Richter scale, resulting in a tsunami in the Samoan islands that have killed hundreds of people.

This event occurred as the Moon joined Jupiter, Chiron and Neptune, but even more significant is the square of Ceres, the planet of nurturing and our relationship with the Earth, to Neptune in what is now a stellium in Aquarius.

Neptune of course represents the vast oceans, and the square of Ceres to Neptune is reminiscent of the devastation that Ceres caused to her devoted followers when her daughter Persephone was taken by Pluto into the underworld.  Sad and desperate, Ceres caused the crops to wither and die, and the people experienced a disastrous famine.

Ceres is rising in the chart of the earthquake event, which occurred at 6:48 am just south of Apia in the Samoan islands.  As the planet rising in the chart it is extremely powerful and suggests that our balance with the Earth is somehow implicated in the event.

Certainly earthquakes and tsunamis have occurred for millions of years and we can’t really say that our lack of care for the Earth has caused this current event.  But we live in a manner that does not respect the simultaneous power and fragility of our connection to the planet.  Humans continue to build settlements and cities in areas which are known to be risky locations for earthquakes and floods, assuming that the power of humanity is greater than the power of the planet.  Every now and then we have to realize that this is just not the case.

Explosions in an oil depot near London and in New Jersey, earthquakes in the Kashmir Valley, Australia and Afghanistan, execution of Tookie Williams, and race riots in Sydney Australia. Disturbing, but not surprising during this Grand Cross period. The tension inherent in the Grand Cross formation can explode into consciousness in our personal lives as well. With Mercury in Sagittarius, discussions with those around us with whom we may not disagree could help defuse tensions and prevent conflicts from erupting into rage.

Caution may be needed over the next few days as the Sun approaches a conjunction with Pluto, both in Sagittarius. There’s a lot of fire energy about right now and using it productively will be the goal AND the challenge!