The astrology of the Egyptian Revolution, June 2013

Back in early 2011 the Arab Spring began in Egypt with the resignation of Hosni Mubarak following weeks of protests during which transiting Uranus was completing its passage through Pisces and making the final square aspect to the Sun in the chart for Egypt as I wrote in this earlier article. One chart factor that I did not include in my earlier research was that the Egyptian progressed Sun and Pluto were also aligned at that time, facilitating the complete destruction and regeneration of a new identity for the nation. Over the past few days as the Sun translated the Uranus/Pluto dynamic by aspecting first Pluto and then Uranus, linking the two together to increase the force of their pressure for revolutionary (Uranus) transformation (Pluto), the first duly elected president, Mohamed Morsi, was ousted by the Egyptian military.  With Mercury retrograde and communication not going altogether as it should, there is some dispute as to whether or not he has been ousted.  He claims he is still in power, as of this writing the military claims that they have taken over. The Full Moon on June 23rd was exactly opposite Mars in the Egyptian national chart and appears to have inflamed the military (governed by Mars) to take action. Most disturbing are reports of gang rapes among the protests in Tahrir Square that are reflected in the transit of the Black Moon Lilith (sexual assault and feminine rage) over the Sun (national identity) in the Egyptian national chart. The BML was tied in with the Full Moon chart that served as the trigger for these events, and it’s not surprising that women’s issues are coming to the surface now.  The Black Moon Lilith conjoins the Moon in the Egyptian chart (which dates from […] 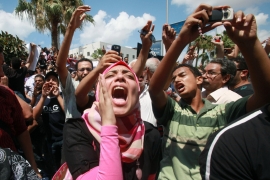