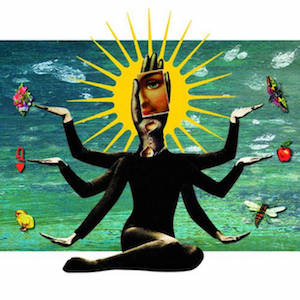 (Album Art from “All Hail Discordia” by Divine Right.) If the global situation seems crazy and insane (and it does!) we can blame it on the conjunction between Eris and Uranus in the warrior sign of Aries, a conjunction that began in 2015.

Eris is a small planet that was discovered in 2003.  Her Roman name was Discordia – she is the goddess who, when not invited to a wedding, began the Trojan War by throwing a golden apple marked “for the fairest” into a circle of goddesses, beginning a dispute that threw Greece into turmoil for ten years.  (Read more about the mythology of Eris here.)  Eris moves very slowly – its orbital cycle is 560 years – and it is still not clear what astrological impact it brings.

Uranus is the planet of radical change and revolutionary behavior.  It has been in the sign of war (Aries) since 2010, fomenting conflicts around the world.  When the planet of discord (Eris) aligns with the planet of disruption (Uranus), it’s easy to see where established paradigms and principles would be turned upside down.

The last Eris/Uranus conjunction took place between 1927 and 1929 in the first degrees of Aries.  This was a period of tremendous scientific and technological (Uranian) breakthroughs as well as political turmoil.  The discovery of quantum physics, the first transatlantic flight by Charles Lindbergh followed by the first woman-led transatlantic flight (Amelia Earhart),  an 8.6 magnitude earthquake in China, rebellions and revolutions encircled the globe including China, Austria, Portugal, Mexico, Japan, Afghanistan.  This of course was the peak of the “Roaring Twenties,” a period of cultural revolution and excesses of all kinds that ended in the stock market crash of 1929 – an event that certainly […]