The Black Moon Lilith in Astrology 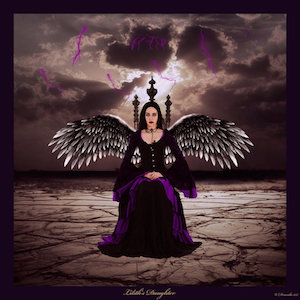 As some of you know, I have been exploring the meaning of the Black Moon Lilith ever since I discovered she conjoined my Pluto and South Node, explaining a lot about the trauma in my past and relationship issues.

In my experimentation with clients I have come to think of Lilith as describing a primal female rage against the patriarchy and domination of men.  In the story of Lilith, she was Adam’s first wife and was equal to him. When she refused to lie under him Adam threw her out and asked Jehovah to provide him with a more suitable mate and it was then that Jehovah fashioned Eve out of Adam’s rib to ensure that she would remain submissive to him (except for that whole apple thing).  Lilith “flew away” or was banished, depending on who you believe, and spent the rest of her years howling in the night with rage for her children who were killed by the angels of God.  Under the patriarchal religions of the Piscean age she was transformed into a demon, a succubus,

asteroid)  is not a body in the sky, but a focal point between the Earth and the farthest point of the lunar orbit.  (See this image from Kelley Hunter’s excellent article about Lilith.)

In a regression a few years ago I uncovered an ancient life in which during a bloody battle I was raped and my children murdered in front of me.  I have always been fearful of having children and I felt that the residual anxiety from this ancient life had bled into my current one. […]