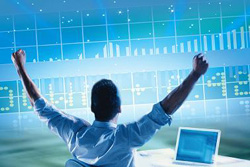 As Jupiter turned direct this week, the Dow rose above 10,000 for the first time in over a year, inspiring many financial experts to crow that the recession is over.  The stock market has been in a continual upward climb since it fell to its lowest level in March of this year, driven primarily by optimism that an improving housing market and the recovery of the financial companies will drive the economy back into gear.
We can tie this recovery to a conjunction of Jupiter, Chiron and Neptune that began back in February and while for many people this has been a planetary cycle of deep personal growth, there is always the danger when Jupiter’s optimism combines with Neptune’s propensity to ignore the facts that we fall into illusion.
Articles like this entitled “Record Streak Continues for Pending Home Sales” are fueling the optimism:  “Pending home sales have increased for seven straight months, the longest in the series of the index which began in 2001, according to the National Association of Realtors®.” This is deceptive in a couple of ways: first, the market seven months ago was at its worst in decades; and second, much of the increase in home sales is driven by the tax credit for first-time home buyers.  Meanwhile, foreclosure levels just hit a new record, affecting 1 in 136 American homeowners.  More foreclosures means more housing inventory, which means a continued slide in prices.
A drop in the number of people filing for unemployment insurance also fueled optimism on Wall Street, but these numbers don’t reflect the vast numbers of people whose right to unemployment insurance has expired.  The national unemployment rate of 9.8% does not include the numbers of workers who have given […]
Share this article...
By Lynn Hayes|2009-10-16T10:41:36-04:00October 16th, 2009|Money and markets|Comments Off on Dow Above 10,000: The Audacity of Hope Collides with Saturn and Pluto
Read More

One year after the fall of Lehman Brothers presaged a worldwide economic crisis, futurist Gerald Celente is predicting that a revolution has already begun in the United States. Many are decrying his “doom and gloom” predictions, but he is saying exactly what I have been saying myself: that you can’t keep repairing a house that is built on quicksand.  The house has to be taken down and rebuilt on a firmer footing.

To recap the astrological history: The entry of Pluto into Capricorn in January of 2008 led to a panic in the stock market as it became clear that the expansion of the Pluto in Sagittarius era could not go on forever.  Pluto brings cultural transformation, and astrologers knew that when Pluto entered Capricorn the structures on which we base our lives (Capricorn), including government, financial and educational systems, and religious institutions would be forever transformed.

But even before this Saturn was paving the way to an increased sense of thriftiness when it entered Virgo back in the fall of 2007.  Suddenly there was the beginning of a shift towards savings and conservative attitudes towards money as the subprime mortgage fiasco began to build.

Evidently Celente couldn’t get anyone in the US to listen, so he has taken his message to Russia Today:

“It hasn’t ended. That was only the beginning. We are going to see a lot more. There is no recovery, it’s a cover-up. They’re covering it up with stimulus packages, with buy outs, with bailouts – it’s not going to fix the problem.”

I personally don’t believe that the coverup is intentional – I think there is a desperate attempt to get back to where the financial system was a few years ago, using the same tools. But as financial analyst Max Wolff says, as […]