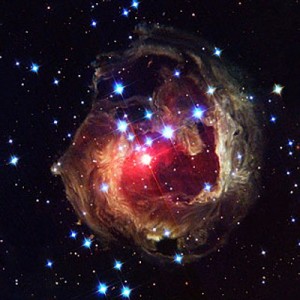 So naturally I love this:

Space is festooned with vast “hyperclusters” of galaxies, a new cosmic map suggests. It could mean that gravity or dark energy – or perhaps something completely unknown – is behaving very strangely indeed.

We know that the universe was smooth just after its birth. Measurements of the cosmic microwave background radiation (CMB), the light emitted 370,000 years after the big bang, reveal only very slight variations in density from place to place. Gravity then took hold and amplified these variations into today’s galaxies and galaxy clusters, which in turn are arranged into big strings and knots called superclusters, with relatively empty voids in between.

On even larger scales, though, cosmological models say that the expansion of the universe should trump the clumping effect of gravity. That means there should be very little structure on scales larger than a few hundred million light years across.

But the universe, it seems, did not get the memo. Shaun Thomas of University College London (UCL), and colleagues have found aggregations of galaxies stretching for more than 3 billion light years. The hyperclusters are not very sharply defined, with only a couple of per cent variation in density from place to place, but even that density contrast is twice what theory predicts.

“This is a challenging result for the standard cosmological models,” says Francesco Sylos Labini of the University of Rome, Italy, who was not involved in the work. …

The result hints at some profound new physical phenomenon, perhaps […]

Thank you Daily Galaxy for this amazing video.

The Messier Marathon: How many galaxies can you see?

When the New Moon occurs near the spring equinox and the sky is dark, there is an opportunity to view up to 110 deep sky objects as catalogued by Charles Messier. These include galaxies and nebulae and star clusters that are normally not visible with amateur astronomical equipment.

For you astronomy buffs out there, Universe Today has provided a tour guide to view all 110 objects at a leisurely pace over an eleven-day period, ten at a time.  They started yesterday though, so you may have to do a bit of catching up!