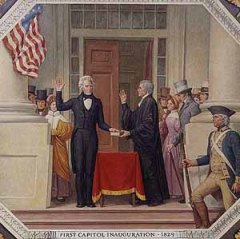 This is a research project that I have been pondering, and now astrologer Rodney Smith has done the work for me:

The interest in the Void-Of-Course moon (VOC) and the presidential inauguration on this blog has prompted me to do some research. Where a President dies or resigns the office, the Vice-President completes the Presidential term as President. This is called Presidency by succession.

The following figures have been rounded within acceptable error for simplicity’s sake- The basic facts,

• One in six presidential terms have been completed by succession.

• One in six VOC presidential terms have been completed by succession

• One in four inaugurations occur under VOC

Primary conclusion: VOC has no noticeable effect on whether or not a president finishes his or her term.

The remainder of the post lists every presidential inauguration that has taken place under the Void Moon. Rodney has used only the five classical planets and has not included Uranus, Neptune, Pluto or Chiron. Even so, his conclusions are indisputable.

The Void Moon is a construct which comes from the horary branch of astrology which seeks to answer questions based on the astrological chart for the moment the question is asked. In this context the Moon, being the fastest moving planet, tells much of the story.  All indications are taken into consideration – hence the concept of the Moon being Void as it hurtles unobstructed into the next sign.

Hopefully this comprehensive research will set many minds at ease!! 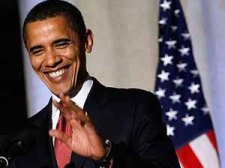 In the field of astrological study known as “mundane astrology,” events and countries also have birthcharts that can be analyzed. The chart for Inauguration Day is also the chart for the Obama administration, because it is the moment of birth of the new government.  Although many astrologers have called for a change of the time of the Inauguration to permit the Moon to enter Sagittarius and thereby avoid the dreaded “Void of Course” period, the Noon time is mandated by the twentieth Amendment of the Constitution and would require an act of Congress to change.

I am less concerned by the Moon being void of course (making no aspects to another planet) than I am interested in the fact that the Moon on Inauguration Day sits right on the Midheaven of Barack Obama’s chart.  The Moon here represents the heart of the People, and it sits on the point where Obama fulfills his desire to serve the People (the Midheaven shows not only career, but where we fulfill the destiny of our Life Path).  He certainly begins his term with the full support of the American people: his approval rating is somewhere between 75 and 80%.  That is not surprising given the fact that transiting Jupiter is conjunct Jupiter in Obama’s chart, something we call the “Jupiter Return” that is associated with abundance and good things.

The Inauguration Day chart has a triple conjunction of Mercury, the Sun and Jupiter in Aquarius, all sitting right on Jupiter in Obama’s chart.  Jupiter here brings its expansion of opportunities to the realm of ideas (Mercury) and the very essence of the Administration (Sun) which is very auspicious.  These planets also oppose Obama’s Mercury, however, which suggests that there will be […]

President-Elect Barack Obama has taken the concept of reaching across the aisle to a new level in his choice of Evangelist Rick Warren to deliver the opening invocation at the inaugural ceremony on January 20.  Rick Warren, author of “The Purpose Driven Life” and one of the best-known evangelical ministers in the US, was moderator of the Faith Forum between the presidential candidates earlier this year and was a leading supporter of Proposition 8 in California which banned gay marriage.

Joseph Lowery, a pastor with deep roots in the civil rights movement and co-founder of the Southern Christian Leadership Council, will deliver the closing benediction. Lowery is not only a civil rights leader with impeccable credentials, he is also one of the few black religious leaders in favor of equal rights for gays.  Moreover, the Lesbian and Gay Band Association will march in the inaugural procession.

Obama has said that he will be the President for all Americans, and he certainly seems to be taking big steps in that direction.  He has some interesting transits going on at the time of the inauguration:  Transiting Pluto, planet of transformation, will be opposite his Venus for the second time, suggesting possible challenges with relationships and alliances (during the first pass of Pluto to Obama’s Venus the scandal about the Reverend Jeremiah Wright erupted, causing the end of that relationship.  In addition, transiting Chiron, the wounded healer, will be within minutes to a transit over Obama’s ascendant which can have effects on a number of different levels; it could signify the revelation of painful emotions (Chiron) regarding Obama’s relationship to others (ascendant/descendant axis), or it could provide an impetus for Obama to act as an instrument of healing (Chiron) for those around him (ascendant).