Mercury turns direct! When is it over?

Mercury will soon officially turned direct, meaning it will begin to move forward again through the zodiac.  As with many other astrological phenomena, astrologers disagree about how long the “shadow” period of the retrograde is, and when it is safe to emerge again from the shadows and begin making decisions and taking new steps.

In my view and experience, as long as Mercury is moving slowly as it does just before and just after the retrograde turn its effect on communication and frustrating events remains strong.  As Mercury begins to pick up speed there is more of an ease of motion that helps to lubricate both verbal communication and the transmission of energy in general.
The sign that Mercury is in and the aspects that it makes to other planets have a great deal to do with the effect of the retrograde period.  Mercury is in Sagittarius now where it tends to instill a broader vision that can be particularly frustrated by the retrograde, and the fact that Jupiter and Uranus are approaching their final conjunction in Pisces is creating surprising changes and turns of events.  This conjunction of Jupiter to Uranus breaks apart our preconceptions and requires that we release the past in order to move forward into a new breakthrough of awareness and experience.
Mercury will not begin to pick up speed until after the Capricorn New Moon on January 4th.  A New Moon in Capricorn, the sign of achievement, is a wonderful time to set intentions for success in business or other practical matters.   At that time Mercury will be in range of a challenging square to Jupiter and Uranus which may make it difficult to concentrate, but it could also encouraging the breaking […]
Share this article...
By Lynn Hayes|2010-12-30T20:12:57-05:00December 30th, 2010|Astrology|Comments Off on Mercury turns direct! When is it over?
Read More

A couple of weeks ago I wrote about the epidemic of UFO sightings under the influence of Jupiter and Uranus as they team up in the sky, and thanks to those readers who let me know about the press conference by the former Air Force officers who are coming out under this influence to tell their stories of UFO sightings.  Jupiter is the planet of expanding the mind, and Uranus brings sudden and unusual surprises so when the two team up we can end up with some interesting events.

One of the witnesses, Colonel Charles Halt, ” in December 1980, was the deputy base commander at joint British/American airbases, Bentwaters and Woodbridge, in the Rendlesham Forest in England. Over the course of several nights, UFO activity was high at the base, including reports of unidentified objects near the nuclear weapons storage area.”

One key element in UFO testimony is the question of why more military or scientific voices haven’t come forward in the past to discuss the possibility of UFO reality. Halt has a simple, straightforward answer.

“Because it’s a career killer,” he said. “I tried to keep it all quiet and quite frankly, at the time it happened, I really didn’t want any publicity, didn’t want to be involved in it. Hey, I was coming up for promotion, and this was not a positive thing. My boss wanted nothing to do with it; he kept it at arm’s length.”

What did Halt and the other former Air Force officers at Monday’s news conference conclude about the UFO events they separately experienced during their service careers?

“This was something of intelligent control beyond any technology we know. It’s my firm belief that it was extraterrestrial or from a different dimension.”

And how does Halt feel about allegations that the Air […]

Wow, is all I can say.  Saturn’s not all cold and darkness, it has a beautiful side.  Perhaps that’s why it’s exalted in Libra! 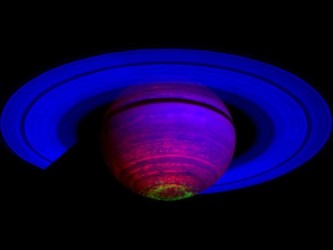 Photo from the Daily Galaxy