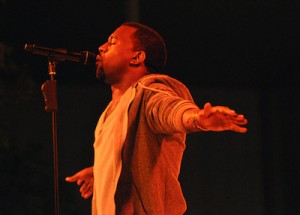 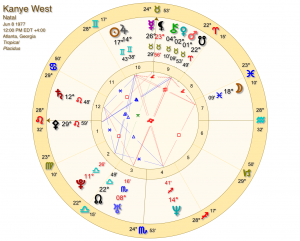 What kind of astrological forces create an individual with such confidence and tenacity? West is a Gemini, with the Sun closely conjunct Jupiter. Geminis are mercurial creatures, able to slip in and out of personas and wear different masks in different situations. They are curious and thirsty for experience. Jupiter (expansion and opportunity) closely conjuncts his Sun, giving West not only a high degree of confidence/arrogance but also a certain amount of easy luck. His Sun/Jupiter conjunction is opposed by Neptune (see this article about the current Jupiter/Neptune square), opening up his spirit to a high degree of creativity (Neptune), but also posing the danger […]

Kanye West has never been known for his humility or circumspect behavior.  I wrote a post on him a couple of years ago after he compared himself to Jesus, and since then he hasn’t really mellowed much.

But his behavior on Sunday night’s Video Music Awards program on MTV was really astonishing.   Snatching the microphone away from Taylor Swift, winner in the “Best Female Video” category, he ranted that Beyonce should have won.

President Obama called him a “jackass,” and who can argue with him.  Just days before, South Carolina Representative Joe Wilson interrupted Obama’s speech to call him a liar, and then there was Serena Williams‘ own jackass moment.  Still…the reactions to these events have appeared to be overamplified, leading a commenter calling him/herself the Cynical Astrologer to note: “hysterical overreacting–from CNN on 9/11 to Joe Wilson, Serena Williams, et al to astrologers everywhere–is the main manifestation of th[e Saturn/Uranus opposition] aspect.”

There is such a sense now of opposition with this aspect, as I discussed the other day, that these events have a reach that extend far beyond the immediacy of their obnoxiousness.  I was invited today to join a Facebook group: 1,000,000 people against Joe Wilson.  The problem is, the greater a reaction to an event, the greater the apparent significance that event takes on.  Instead, we all take sides and the controversy expands and grows, expanding conflict and making compromise more and more impossible.

I hope that this is merely a function of the Saturn/Uranus opposition, which peaks today for the third time.  We do have two more phases of this cycle, but with Pluto having turned direct I’d like to think we can now move forward with some more important issues.