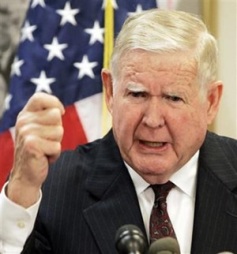 Representative John Murtha of Pennsylvania, who was one of the more outspoken critics of the Iraq War, died yesterday from complications of gallbladder surgery.  I profiled him back in 2005 in this article.

Murtha had a nearly exact conjunction of Mars (aggression and war) to Chiron (wounding and healing), and transiting Chiron was activating that conjunction nearly exactly at the time of his illness and surgery.

Although he voted in 2002 to approve the war, in 2005 he said “The war in Iraq is not going as advertised. It is a flawed policy wrapped in illusion” and called for an immediate pullout of the troops.

He was a tireless advocate for the military as reflected in that Mars/Chiron conjunction.  Chiron is known as the “wounded healer” and shows what areas in life we experience wounds, and where we seek to become healed ourselves and heal others.  For Murtha, the military was his world and the focus of his dedication and to the end he insisted that the current conflicts could not be solved militarily.  It’s too bad no one is listening.