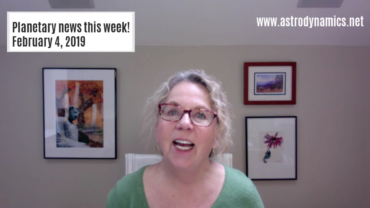 This week begins with a New Moon in Aquarius that is certain to explode some paradigms and create some change, whether we want it or not.  When the Sun and Moon align, we begin a new lunar cycle and our intentions that we seed at this time have the potential to take root.

Aquarius is a complex sign, and I talk more about this complexity in the video I’ll link below.  Aquarius is ruled traditionally by Saturn from which it derives its nature of detachment and clear vision.  However, Saturn fails to completely explain the concern with social justice and innovative thinking which is derived from its modern ruler, Uranus.  Under the influence of Aquarius, especially at the New Moon, we are able to see more clearly with a broader vision that is unencumbered by emotional attachment and drama.  This New Moon asks that we take a more transpersonal view lives and learn to witness the interconnectedness of all things.  Attachments and outmoded ways of thinking that don’t serve the higher good can fall away now as they are no longer needed.  A new sense of fairness can emerge as we rise above the focus on the Self that is the domain of Leo, the polarity which opposes Aquarius.

Three planets are in Aquarius this week, including not only the Sun and Moon but Mercury as well.  Mercury, representing the mind, is easily able to take the high road in Aquarius, helping us to keep our thoughts clear and free from prejudice.  Harmonious angles from Mercury to Mars and Uranus aids this process even more.  These few days until Mercury moves into the more serene and mystical sign of Pisces on the 10th have the potential for clear and […]