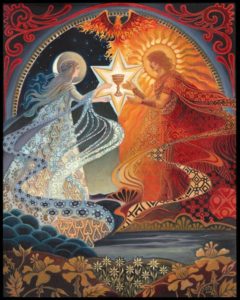 If you’ve been following the astrology of the year or watching my videos, or really, just living in 2020, you’ll know that things have been intense this year.  The astrological explanation for this is rooted in a triple conjunction of Jupiter, Saturn and Pluto in the sign of Capricorn which seeks to build structures and consolidate power.  Over the past couple of months Mars, the fire planet which presides over wars and aggression but also motivation and desire, has been in its own sign of Aries where it is most powerful, and it is locked in a challenging square aspect  to the Capricorn planets of repression and control, which has added a powder keg of reactivity and served to add flames to a fire that was already burning.  Mars turned retrograde on September 9th and Saturn and Pluto turn direct next week, so all three planets are at a virtual standstill in the sky, feeding the flames as we struggle to find a way to utilize the fire of Mars in constructive ways that will help us to rebuild and reshape our lives for an uncertain future.

In the midst of this we have a Full Moon in Aries on October 1st.  Aries, the first sign of the Zodiac, is the sign of self-determination.  Ruled by Mars, Aries bestows the courage and independence to forge our own path in life, driven by desire and inspiration.  Mars gets a bad rap in the astrology world, being the god of war and all, but a healthy Mars is essential to our well being. Mars encourages us to follow our dreams – planting the seeds of desire, Mars energizes us to pursue our […]