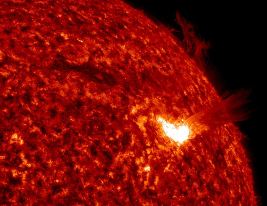 The planet of transformation is always transforming

Fans of the planet Pluto will find this pretty interesting:

Pluto is not simply a ball of ice and rock but a dynamic world that undergoes dramatic atmospheric changes. While they believe the changes are driven by the seasons, it may mostly come from how quickly things can change on Pluto. The seasons are propelled as much by the planet’s 248-year elliptical orbit as its axial tilt — unlike Earth where the tilt alone drives seasons. On Pluto spring transitions to polar summer quickly in the northern hemisphere because Pluto is moving faster along its orbit when it is closer to the Sun.

“If Earth had such an extreme orbit, and we were experiencing a nice springtime day with 60-70 degree F temperatures, as the orbit changed it could suddenly drop to -90 degrees F,” said [Mike] Brown.

Here’s a NASA video of Pluto taken from the Hubble images.

One of the more fascinating things about astrology is the synchronicity between the physical characteristics of the planets, the names assigned to them by astronomers, and the astrological correlations.  Mars, the planet named for the God of War, appears reddish in color and as we now know, shows signs of ancient devastation.  The astrological Mars rules aggression and warfare.  Uranus, the planet with the most eccentric orbit (it orbits laterally rather than vertically) is associated with eccentric behavior.  Now we discover that Pluto, the planet that rules endings and new beginnings, is itself always transforming itself.

What an amazing Universe we live in!

After the initial launch of the Hubble scientists discovered that the optical mirror was flawed.  Because the Hubble was supposed to be shooting photographs of deep space, this was a real problem.

Yesterday, with Mercury Retrograde,  the Atlantis space shuttle was launched with a crew to repair the Hubble telescope.  Immediately after its launch scientists discovered some damage to the exterior of the shuttle but it was termed “minor.”

This is a good illustration that Mercury Retrograde periods do not necessarily need to be feared.  Yes, problems occur but they are rarely fatal.

Joseph Mina adds in the comments:

NASA was created by an act of Congress on July 29, 1958. At that time, Mercury at 2 Virgo conjuncted Pluto at 1 Virgo, both sextile Neptune at 2 Scorpio. Just prior, on July 20th, Mercury entered its retrograde shadow at 24 Leo with the retrograde station occurring on August 9 at 7 Virgo. So Mercury Retrograde would be a natural rhythm for NASA. Add the Scorpion juice of the Pluto conjunction to the mix and you have some high octane rocket propellant. One other interesting astrological point – Chiron in the July 29 chart is 21 Aquarius. As transiting Chiron is now moving back and forth over that degree with Jupiter, a renewed energy is building to take NASA in a different direction. Very happy the Hubble […]

New evidence supports the theory that Mars may have been the home to life forms at one time:

NASA researchers want to determine whether the planet could support, or ever has supported, life. The nutrients are among a few positive indicators they have gleaned since the Phoenix Mars Lander began collecting and testing soil samples last month. Early findings, including ice crystals and nutrients, point toward water — the chemical basis for life.

“At this point, we can say that the soil has clearly interacted with water in the past,” he said. “We don’t know whether that interaction occurred in this particular area in the northern polar region, or whether it might have happened elsewhere and blown up to this area as dust.”

For years scientists have speculated that Mars was formerly a wet planet. Some UFO-logists and conspiracy theorists have hypothesized that life on earth was seeded from Mars when the planet ran out of water and its inhabitants relocated to a lusher, greener planet. We now have evidence thatleaky seas could render the Earth as dry as Mars (this will be in a billion years so there’s no need to panic just yet!).

What pleases me is the ever-growing pool of evidence that what seemed far-fetched ten years ago (life on Mars) is no longer so far-fetched. As we shift into the Aquarian Age […]

The possibility of additional solar systems brings up an interesting possibility: could there be a different astrological system for each one? A completely unique set of “myths” and legends, and patterns of time that link the citizens of those systems to life itself? You know the planets of our solar system, each a unique world with its own distinctive appearance, size, and chemistry. Mars, with its bitter-cold, rusty red sands; Venus, a fiery world shrouded in thick clouds of sulfuric acid; sideways Uranus and its strange vertical rings. The variety is breathtaking.

Now imagine the variety that must exist in hundreds of solar systems. There may be worlds out there that make Venus seem hospitable and Uranus positively upright. Only 20 years ago, astronomers were unsure whether any such worlds existed beyond our own solar system. Now, they’ve found more than 280 of them, each with its own planetary “personality,” each a fascinating example of what a world can be.

Yet the heyday of planetary discovery is only just beginning. This fall, astronomers will start a massive search for new planets by observing about 11,000 nearby stars over 6 years. This number dwarfs the roughly 3,000 stars that astronomers have searched to date for the presence of planets. Scientists estimate that the NASA-funded project, called MARVELS (Multi-object Apache Point Observatory Radial Velocity Exoplanet Large-area Survey), will find at least 150 new planets—perhaps many more.

“We’re looking in particular for giant planets like Jupiter,” says Jian Ge, principal investigator for MARVELS and an astronomer at the University of Florida in Gainesville. Ge likens big planets to “beacons of a lighthouse” signaling the presence of entire solar systems. “Once we find a big planet around a star, we know […]