Tales of the Neptune Retrograde Station 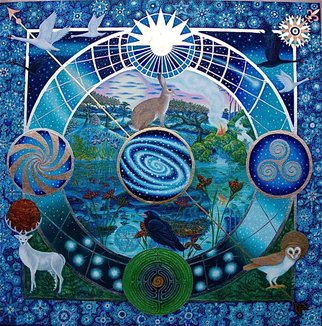 Neptune, the planet of divine creativity and illusion, turned retrograde on June 16th. This is not unusual – the outer planets turn retrograde (appear to move backwards from our perspective on earth) every year. Before a planet changes direction its apparent motion slows to a standstill, just as a car does when making a U-turn.

When a planet is stationary, it captures our attention.  If that planet is affecting something in our chart, it yells at us to take notice.  It shines like a laser beam, a focused point of light streaming its planetary energies to Earth.  And right now, Neptune has the spotlight.

Neptune is an outer planet – its influence is transformational rather than personal.  It inspires us to experience a Self that lies beyond our individual personalities – to experience divinely inspired creativity, to merge with the Soul in meditation, to experience the Godhead in all of its myriad forms.  It also tempts us with fantasy and illusion, fooling us with subterfuge and undermining our ideals.

Neptune will remain retrograde until November 22nd.  During this time the Neptune influence becomes more profoundly personal.  You may feel like you are wading through a thick fog in your life, unable to make a clear decision.  You may find yourself succumbing to strange illnesses for which there are no names.  You may be more susceptible to lies and deception and less able to discriminate clearly.

This is a time to turn within with a greater focus on the inner world than the outer.  Meditation and rest is important during this time as our physical energy may be diminished, especially if Neptune is transiting planets in your own chart.  You may be more sensitive to psychic energies than other times, […]