Samhain – a day of remembrance

Samhain (an ancient Gaelic word pronounced Sow’-en) is the ancient Celtic holiday that has come down to us as Hallowe’en (derivation of “All Hallows Eve”).  Although it is associated today with witchcraft and doings of the devil, in pre-Christian times Samhain was simply the time when the veils between the worlds were at their thinnest.  It was a time of reverence for the process of death and the mysteries of life. The astrological Samhain actually occurs at the midpoint of Scorpio which is the “cross quarter” between the Autumnal Equinox and the Winter Solstice and falls on November 8th this year rather than October 31st.

The women that some now call “witches” were the wise women – the ones who understood the mysteries of the stars, the ones with an affinity to the healing powers of plants…the ones who helped to heal the sick and comfort the wounded.  The ones whose power came directly from nature and bypassed the power structures of the Church and were therefore dangerous.

“History is written by the winners,” and therefore most of us were never told these tales of the brave and wise women and men that were healers of souls and teachers of the spirit. Instead, we were fed stories of evil witches and devil-worshipping pagans that were meant to frighten the masses into toeing the line of the political and religious establishment.

Samhain is a time to remember the dead, and I can’t think of a better way to remember our ancestors on the path of spiritual growth and wisdom than to watch the Burning Times Documentary.  This is a beautiful film that depicts the struggle of women and men to survive the long period of the Inquisition that lasted […] 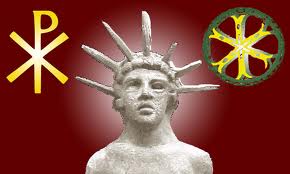 During the later Roman Empire, the Emperor Aurelian introduced the official cult of Sol Invictus which honored the sun-god as the primary divinity of the entire empire. Although the solar deity had been worshiped throughout time and in many ancient cultures, it was the cult of Mithraism that was the final solar cult before the spread of Christianity wiped out virtually all pagan religions.

Before the time of Constantine the ancient world was a virtual cornucopia of different religions and cults that existed all over the Roman Empire and eastward into China and India. As a result of these competing doctrines “when Christianity was only one of several dozen foreign Eastern cults struggling for recognition in Rome, the religious dualism and dogmatic moral teaching of Mithraism set it apart from other sects, creating a stability previously unknown in Roman paganism” (Mithras in the Roman Empire). The striking parallels to Christianity in Mithraism have long been pointed out, for Mithras was said to have been: born of a virgin birth, had twelve followers or disciples, was killed and resurrected, performed miracles, and was known as mankind’s savior who was called the light of the world and his virgin birth occurred on December 25. Indeed, the resemblances are so striking in that all of the Christian mysteries were known nearly five hundred years before the birth of Christ that later church fathers claimed that Satan had created all of this prior to Christ’s birth so as to confuse the laity.