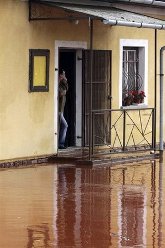 The first phase of the Pluto/Ceres conjunction brought us the Horizon oil rig disaster, and now as Ceres prepares to conjoin Pluto for the second time we have a “flood of red sludge” that could equal or exceed the negative effects to the environment of the oil spill:

As Hungarian authorities take stock of the formidable task to clean up a toxic sludge spill that has killed at least four people, many environmentalist groups say the government should outlaw storing toxic red sludge from alumina processing in open reservoirs.

Those living near the Ajkai Aluminia Refinery, which is about 100 miles southwest of Budapest, say a wave of “red mud,” which is a byproduct from turning bauxite into alumina, washed through their towns Monday afternoon after a dam that holds the sludge burst.

At least 100 people have been injured in the incident that has prompted officials to issue a state of emergency for the communities near the refinery. Several days of heavy rains caused the dam to break.

“The long-term consequences could be very bad,” says Marton Vau of Greenpeace Hungary, noting that the sludge could leak into the drinking water supply, and, if allowed to dry, could become airborne and inhaled. The alkaline substance, which is already responsible for killing fish in local rivers, could also threaten the Danube River.

Sadly, humans have very short memories and no sooner was it clear that the oil spill in the Gulf of Mexico did not appear as devastating as feared (although the long-term effects are not yet known), oil companies were clamoring to expand deep ocean drilling.  But the combination of Pluto’s potentially devastating transformations with Ceres’ call to respect the Earth will be a potent reminder that […] 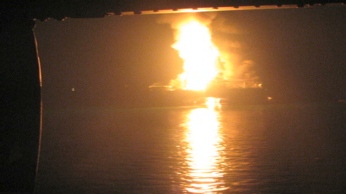 A deepwater oil rig off the coats of Louisiana has burned for more than a day.  Eleven workers are missing and it is thought that over a million liters of crude oil could be released from the damaged rig every day.  The oil slick that has resulted is now eight miles long.  This calamity will destroy the delicate ecological balance of this area that is home to a variety of shellfish and fish including the rare bluefin tuna.

Ceres, the former asteroid that was elevated to dwarf planet status when it was reclassified with Pluto, is the planet that rules our relationship to the environment and the planet that we live on.  (For more information on Ceres listen to the first half of this recent podcast.)  Ceres is currently traveling in the early degrees of Capricorn, the sign of rules and structures and facing up to difficult realities.

Pluto is retrograde right now in Capricorn, and is currently just one degree from a conjunction to Ceres.  In its role as destroyer and rebuilder, Pluto often creates destruction as a precursor to regeneration, and in association with Ceres it is deeply connected to the myth of Persephone/Kore, the daughter of Demeter/Ceres who was abducted by Pluto and taken into the Underworld.

The elevation of Ceres has brought about a new global awareness about the needs for environmental balance.  Perhaps this explosion (Pluto) will facilitate even greater awareness about our tenuous ecological balance (Ceres).

Update:  astrologer Jamie Funk reminds me that Uranus is in an exact quincunx to Neptune as it opposes Saturn.  The quincunx is a minor aspect but when it forms exactly it creates a pressure that has no way to release. […]