A tale of two brothers: Princes William and Harry deal with Megxit

As Britain deals with Brexit and the departure from the European Union, it is also struggling with the departure of Prince Harry and Meghan Markle from the royal family.  I am firmly in the camp of Team Meghan, and you can read my profile of her here, and an analysis of the Harry/Meghan relationship here. 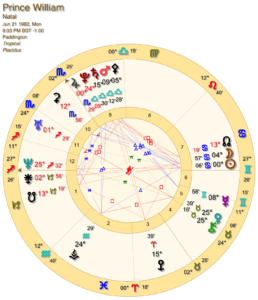 With Jupiter sitting right on the Midheaven of his chart and his Sagittarius Ascendant conjunct the Galactic Center of transformation Prince William was born to the throne.  However, Neptune on his ascendant suggests that he is not easily known.  Strong Neptune contacts to the Sun or Ascendant often depict an individual who tends to carry the projections of others and what they believe him to be, and this is particular true of famous people and princes. With the Sun conjunct Moon in emotional Cancer he is extremely sensitive, with exceptional importance attached to family and tribe.

The exact conjunction in his chart from Venus (love) to Chiron (wounding and healing) suggests that relationships are painful for him, and it’s well known that Kate Middleton was not his first choice of a bride.  His heart was broken several times before he came to this decision, and the fact that the decision to marry came during his Saturn Return is, in my mind, problematic.  With Sagittarius rising bestowing a craving for adventure, he resisted settling down.  But his Sun/Moon conjunction (New Moon) in family-oriented Cancer sits in his seventh house of partnership, his Mars (drive and desire) is in the relationship sign of Libra, and he was destined for family life and partnership.  Cancer represents not only the family, but […]