There’s no such thing as bad publicity, and astrology has had LOTS of publicity over the past few days with the big news over the 13th sign and the precessional shift.  Rachel Maddow weighs in and explains the whole thing, except I’m not sure that her astronomy is correct when she ties the Moon into the situation. The astrology comes in at around four minutes and be sure to catch her very last line: 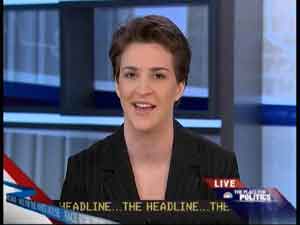 Rachel Maddow’s new show began on September 9, and if you’re a fan of the truth, no matter what side you’re on, you owe it to herself to check her out.

Twilight has posted a noon chart for Rachel, along with these words of wisdom:

I wonder who’ll be on the political scene in the USA around 10 years from now, say for the elections in 2016 and 2020? One name in the future’s political headlines which wouldn’t surprise me a bit would be Rachel Maddow. She’s 35 now, in ten years she’ll be just about the right age to run as a presidential candidate, or be chosen as VP, having perhaps done a stint in the House or Senate in intervening years.

Rachel’s new TV show, which has all the hallmarks of being “the one to watch” for those keen on politics, was aired for the first time last night. She has been seen fairly regularly on MSNBC all year, doing pundit duty along with Olbermann, Matthews, Buchanan and the rest, as well as presenting a regular radio show on Air America. She strikes me as the type of person for whom US politics is crying out. She oozes confidence, speaks and debates with a no nonsense clarity, clear grasp of issues, but never loses her calm, friendly approach.

What’s most notable about Rachel’s chart to me is the combination of Aries (Chiron, Sun and Venus conjunct in Aries) which is dynamic, inspirational, willful and courageous; Moon and Mercury conjunct in sensitive Pisces, which is empathic and creative but fragile; and Mars conjunct Jupiter in Aquarius – the innovator, the fighter for social justice and equality.   Pluto (power issues) opposes Venus […]