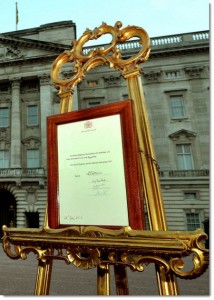 Scorpio is rising in the chart – the […]

Update:  The heir is born!  4:24 pm GMT at the Full Moon!  Scorpio rising with an 8th house Sun of Power.  I will be writing more tomorrow morning so stay tuned.

The world has been watching Prince William and Kate Middleton as they wait for the birth of their first child.  Kate went into labor this morning and it is likely that the new heir to the British throne will be born today, just after the Full Moon in Capricorn.

If the baby is born before 4 pm GMT she or he (the gender of the baby is still not known) will have the Sun at the last degree of Cancer.  When the Sun is at the last degree of a sign there is a sense of transition, the ending of one phase of learning and completion of a cycle.  A royal child with the Sun in this degree could see the end of the monarchy during their lifetime.

If the baby is born after 4 pm GMT the Sun will be in Leo, the sign of Kings and Royalty.  That would be a fitting placement for the child of Will and Kate, who seem to have revived the love of the British people for their monarchy after a long period of personal scandal and economic woes.  The Sun at 0 degrees Leo would signify a new phase of the royal line and a new beginning for the nation.

The Moon is also on the cusp today – a birth before 6 pm GMT will bestow a Moon at the last degree of Capricorn, and after 6 pm the Moon will be in Aquarius.  A Capricorn Moon would signify someone who is determined and somewhat conservative – the Aquarius Moon […]