Pluto turns direct, and what’s next

As you may have read in these pages and elsewhere, the outer planets travel retrograde for about half the year, every year so that’s not so unusual.  This year Pluto turned retrograde (it appeared to travel backwards from our perspective on Earth) at 23 degrees back in April, and traveled only three degrees since then.  In preparation for its retrograde turn it has come to a virtual standstill and is beaming down its Plutonian pressure for change, transformation and letting go.

While Pluto has been traveling through Capricorn, the sign of corporations and governmental structures as well as other foundational elements of our physical world, there has been a global transformation with respect to power (Pluto) in governments (Capricorn), among other things.  Pluto’s entry into Capricorn marked the economic crash of 2008, and then presided over the longest bull run in the stock market in history.  The concentration of wealth from the hands of many into the hands of a few is another hallmark of Pluto in Capricorn.

While Pluto has been retrograde, it came very close to a conjunction to Saturn and the South Node. Saturn is a personal planet and operates in the personal realm, challenging us to face our responsibilities and work diligently towards our goals and often testing us in various ways to increase our emotional and physical endurance.  Pluto is a transpersonal planet; its influence can be more ruthless in its pressure to create and support personal transformation.  Saturn makes things hard, Pluto can break us or make us.  With both of these planets  pressuring the South Node of the past, it’s no wonder that there have been personal crises and revelations of a very public nature as the Conscious […]

Diane on Jupiter-Uranus colliding with Saturn-Pluto this summer

I return from my trip today!

Diane Lang, the Libra seeking balance (from the blog of the same name) writes:

On June 10, 2010 in Washington State where I live, a much tougher law regarding cell phone use when driving goes into effect and I see it as an excellent example of the Jupiter-Uranus conjunction in Aries smacking into Pluto in Capricorn. This law allows anyone using a cell phone while driving to be ticketed to the tune of $124 and the cops have already given notice they will NOT be handing out warnings either.

The group most likely to ignore the hazards of texting or talking on a cell phone while driving are young and male – and a pretty good fit for Jupiter conjoined Uranus in the masculine, fire sign of Aries. They tend to be convinced they are both immortal and consider themselves capable of driving with all kinds of distractions. Me, I’m over sixty, female and KNOW it is a very bad idea to do anything but pay strict attention to my driving. Heh, I have to be on high alert watching out for all those young, distracted drivers . . .

read more here… Jupiter and Uranus in Aries certainly are indicators of reckless driving.  This is a good reminder for me to put the phone away! 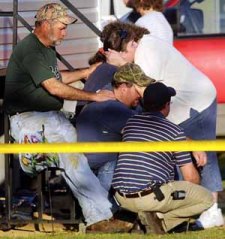 On March 10, 2009, Michael McLendon (4/11/1982, time unknown) went on a rampage in his home town of Kinston, Alabama, resulting in the death of eleven people including his grandmother, aunts and uncles.  He killed his mother and her three dogs and then set the sofa on fire, an act of extreme rage.  Although he left a “grudge list” of people that he felt had harmed him, none of those individuals were killed.

As in so many cases like this, people that knew McLendon have said he was a “quiet, very reserved individual.”  But another report quoted a neighbor as saying that McLendon was always firing off guns and scaring his cows.  Astrology can provide a clue into the underlying psychology behind these events now that we have a birth date for the shooter..

Michael McLendon was born when the Sun was in Aries, the first sign of the zodiac.  Aries is the sign of initiation, of inspiration, and of warfare.  Ruled by Mars, Aries individuals need to express themselves through acts of courage and independence and you can see in the little that is known about McLendon’s  history that he tried to do just that.  Graduating from high school he enlisted in the Marines, only to be discharged a month later for “fraudulent enlistment” (no details available).

The Sun in this chart was opposed by both Saturn and Pluto, the two planets of challenge, death and transformation.  When Saturn is in a challenging aspect to the Sun there is a sense of isolation and loneliness, and Pluto in that position tends to create an intensity and a thirst for power that needs expression in some way.  The combination of Saturn and Pluto in that position can be quite challenging. […]