Kim Kardashian and the Saturn Return 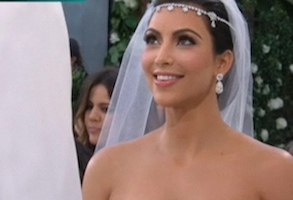 Every one of us experiences the first Saturn return at the age of 28-30 when Saturn in the sky returns to its place in our birthchart.  Saturn insists on discipline and order, and this is the time when we face the necessity of growing up and for some of us this is easier than others.  Some of us will rebel and run from responsibility, and others of us will embrace it.

Kim Kardashian recently admitted that she married second husband Kris Humphries because she was 30.  She told Bravo’s Andy Cohen: “At the time…I just thought, ‘Holy s–t, I’m 30 years old, I better get this together. I better get married.'” (reported by Fox News)  As reality TV fans know, her marriage to Humphries lasted 72 days.

Kardashian’s Saturn Return began in December 2009.  During 2010 she had a series of relationships before she started dating Kris Humphries in October 2010, shortly after the final passage of transiting Saturn over her natal Saturn, and they became engaged in May 2011.

Many people marry during the first Saturn Return (including me!) and these marriages often fail because the motivation was more about being ready to move on to the next phase of our lives, and less about finding the right person to make a life with.